1874 Recruited from the Southern club, which played at Fawkner Park. 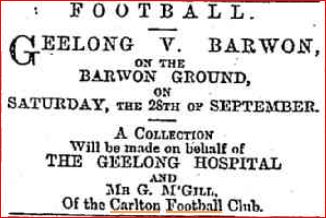 'The Footballer' publication says of the Carlton 1875 premiership team
".........George MacGill and Sam A. Wallace have shown better form than ever".

(The History of The Carlton Football Club, Brian Hansen, p 27,30)

1875 The Argus has MacGill (McGill) named in a Carlton First Twenty side against a Carlton 25 in a scratch match at Royal Park on Saturday 8th. May.

1876. (Vice captain) A splendid player anywhere, a splendid kick, but a trifle lofty in it, and very cool, frequently "bought down the house" by his brilliant marking.
Second for the First Twenty drop-kick with 50 yards, and fourth for the Cup Contest with 59.5 yards.
(The Footballer. 1876. p34)

1877 (Vice captain) Commenced operations in grand style, and fully maintained his prestige for marking and kicking to the end, did not play regularly.
(The Footballer. 1877. p35)

1878 Chosen as Captain for the season and commenced very earnestly, but met with an unfortunate accident in the Waratah-Carlton contest and retired. Happily is well and hearty again.
(The Footballer. 1878. p31)

1878 Playing in the second game against Waratah (on 1 July),
"one of Carlton's stalwarts George McGill broke his leg, and the accident as good as ended his football career"
(The Carlton Story, H.Buggy and H.Bell, p44)

George MacGill broke his leg just above the knee and had to be carried off.
The accident was the result of a collision with a team mate.
(Carlton-Waratah game M.C.G. Monday July 1 1878

This accident ended George's football career.
Twenty years later in 1898, The Leader (May 21) in response to a reader's question says, "McGill has walked lame ever since."

A glimpse in to how the game was played in the 1870's and George McGill's football memorabilia. Click here> http://nla.gov.au/nla_news-article204132123

The Riverine Herald July 03 1878 said of MacGill's accident,
"I refer of course to the case of Mr. Gill, the unfortunate member of the Carlton Club, who had his thigh broken during the thick of the play on the Melbourne Cricket Ground yesterday. Had the fracture been a compound one, as it fortunately was not, the injured player may have lost his life. As it is, however, I was happy to learn on inquiring at the Melbourne Hospital this afternoon that the fracture was reduced without difficulty, and that the patient is progressing very well, and he may be expected to be able to use the limb again in about six weeks."

"There's an old identity in the athlete world in A. E. McGill, of the local court. He played football and cricket in South Yarra, Victoria and followed the game up a bit when he came over here. His brother, George McGill, was the captain of the Carlton Club. He was a six footer. He met with an accident in the field and broke his leg, which finished his career.
Old Victorians will remember the landmark in Elizabeth Street, opposite the G.P.O., McGill's newspaper and book shop, which still exists under the same esteemed name. The old one horse cabs to and from Hotham used to start opposite their front door."
The newsagency was purchased by Charles Patrick Murphy around 1902, "acquired from the son of the founder." (Advocate January 28 1937 p32)
Father/founder may have been F. McGill. An advert in The Age Saturday July 06 1901 lists places to buy the Sydney newspapers in Melbourne, one newsagent listed is F. McGill, 179 Elizabeth Street opposite G.P.O. city.
McGill's newsagency after 150 years finally closed its doors in 2009, a victim of high city rents. 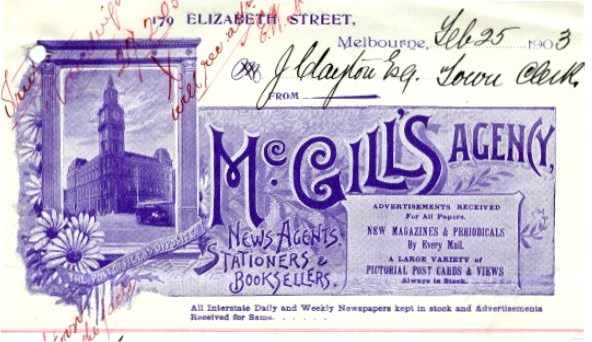