Carlton were runners up to Geelong in 1879. They played 22 games for 16 wins, 4 losses and 2 draws. George Coulthard was named Champion of the Colony for the third time in four years. He was also the Champion goalkicker of the Colony with 19 goals.

New ground at the southern end of Princes Park, named Princes Oval, officially opened on May 3rd. 1879.
It had a movable picket fence and 40 foot high goal posts.

On that day Carlton played a 25 man side made up 10 from the Victory Club, 10 from Lincoln and 5 from the Carlton Imperials, with the Blues winning 7-0.

In June Carlton beat Melbourne 4-0 in front of 12,000. and the critics declared that rarely had Carlton fielded such a complete, well balanced team.

Position play and intelligent teaming carried it to a notable victory; with George Coulthard playing a dominating game, and Murphy , Barrass , J. Melville, Richards, Goer , and Gardiner in top form.

First night game.
Carlton played Melbourne, August 13th.
At 8.30pm at the Melbourne Cricket ground, the first to be played in Victoria under electric light. (8000 candlepower)
Coulthard kicked 3 goals, but the white ball burst and had to replaced with a brown ball which could hardly be seen on the muddy ground.
Carlton won 3-0.
Attendance 7,000.

September 13th.
4,000 attended the Geelong vs Carlton game in which Pivotonians won 5-1.
700 Carlton supporters hired a special train to Geelong.

September 27th.
10,000 turned out for the Carlton-Melbourne clash at Princes Oval. This game was abandoned when Carlton protested that Melbourne were going to play Sandilands of Geelong.
The Melbourne captain could not get his way and took his players from the field.

Carlton finished the season with a win over West Melbourne.

"St. Kilda nominally a senior club began the season a little better than junior form,
and after a struggling existence for a time, finally collapsed soon after the season was half way through."

"I strolled as far as the club's new ground in Prince's Park, the other afternoon. It is, indeed, a credit to their enterprise; level as a cricket field, it has the additional advantage of the necessary regulation length and breadth.
All honour to the energetic Power*, whose exertions in this matter have been signally successful.
This ground will not be used, however, until the end of August, as another crop of English grass has just been sown."
(Weekly Times p4)
.* Carlton treasurer Tom Power

"The East Melbourne cricket ground, which is to lengthened for the purpose, will be Carlton's arena of strife."
(Weekly Times p4)

The Australasian commenting on this season's fixture;
"In some measure it is regretted that the difference between the club (Hotham) and Carlton has prevented the arrangement of any matches with the latter this season, but the existence of any feeling which renders inpossible an amicable meeting is more to be regretted than the mere discontinuance of the games, for better no games than unfriendly ones."
Essendon appears on the fixture list for the first time since it's promotion to a senior club. 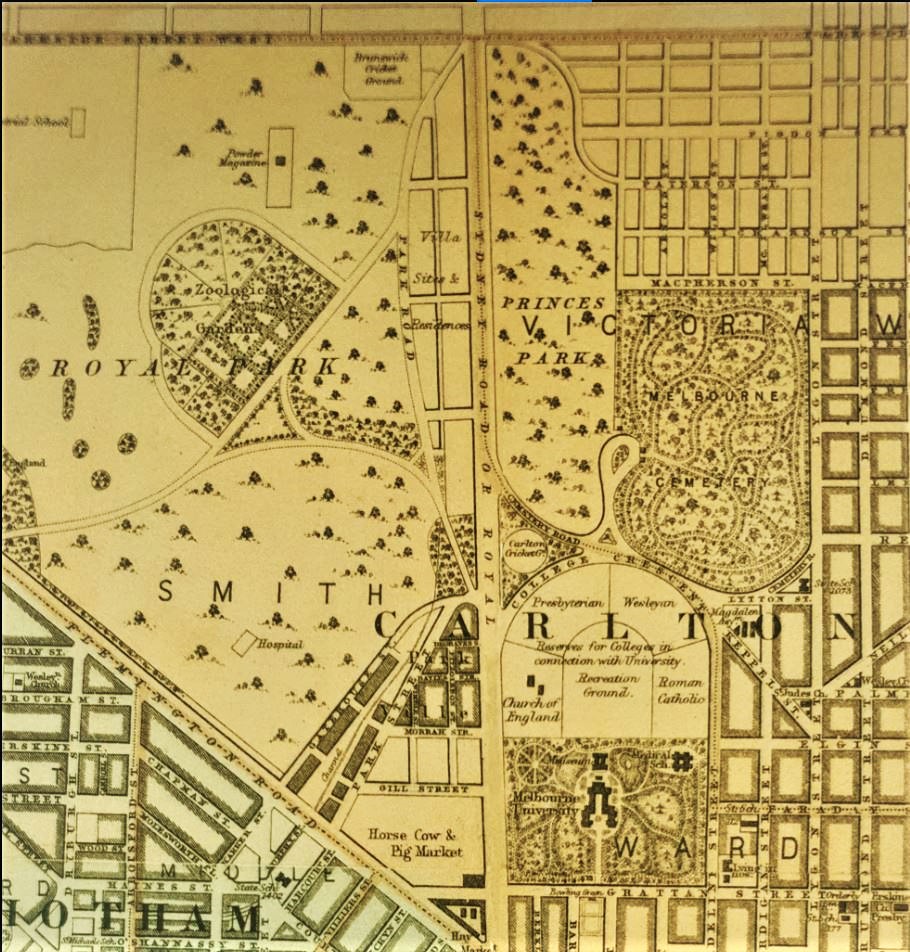 1879 Carlton area map
Princes Oval was in the southern end of Princes Park, it ran east - west, just to the north of "The Triangle" (Carlton Cricket Ground)
The footballers occassionly trained on the "triangle" but the ground was too small for senor games. Some junior teams played there.
Former ground Madeline (Swanston) Street was in the University grounds approx where the letter A in ward is marked.
The Royal Park ground according to Carlton player Frank Coffey was just to the south of the Zoo.
Carlton also played on the University recreation ground and paddocks in the precinct in the early days.
The Clyde Hotel (still trading) corner of Grattan and Cardigan streets is where some players changed in to their uniforms and walked to the Royal Park ground. Some committee meetings were also held there.

"The new ground of the Carlton Club in Prince's Park, situated just beyond the cricket ground, and close to the Brunswick-road (Sydney Road) should, from its appearance, prove unequalled as an arena for play. I have not got the measurements, but roughly I should say must be close on 200 yards in length, by 150 wide. It is enclosed by the same fence that was used when the Carlton were allowed to play on the Madeline-street reserve, and it has been levelled and sown with English grasses. The amount of work done may be gathered from the fact that £148 has been expended in levelling, grassing and weeding, £25 in repairing the fence, and £74 in painting it, the total expenditure to date being £265, in which, as it will be seen, the cost of making the fence is not included."
(Leader p12)

May 03
Carlton played Carlton Juniors, a combined 25 team of the Victory and the Lincoln clubs and Carlton Imperial, at the Blues new ground "The Oval" (Princes Oval) at the southern end of Princes Park.
10 players each from the Lincoln and Victory, and 5 from Imperials.
Crowd; 2,000
The Melbourne City Council has levelled the playing surface, planted English grasses and erected a picket fence. The goal posts are 40ft. high.
The committee has spent £1,000 ($2,000) in enclosing, planting, and improving the ground.
The condition of use of the ground is that the club must not charge for admission.
The club has to rely on membership subscriptions and donations.
After various toasts, the Mayor kicked the ball off for the Juniors.
The Carlton team played well, the judgment and skill of Coulthard and Coventry being very much admired.
Carlton team; (21 named)
Barrass, Brooks/Brookes, Coventry, Coulthard, Goer, Gardiner, Henry, Kelly, Murphy, Melville, Nudd, G. Robertson, J. Robertson, James Rickards, John Rickards, Smith, Souter, Turnbull, James Watt, Woods, and R. Hunter.
Carlton won; 6-0 (Half time 3-0)
Goals; J. Henry 2, John Rickards 2, Eddy M. Brookes, G. Smith, Coulthard.
Best; Coulthard and Coventry.
Players mentioned; (8) Barrass, Coulthard, Brookes, Henry, Smith, John Rickards, Murphy, Coventry.

"It will be seen from the following, clipped from the Evening News,Wellington, New Zealand, and dated 20th March, that our old friends Sandilands* and Page, formerly of the Melbourne club, are endeavouring to introduce the Victorian rules in New Zealand:
'A meeting of footballers was held at the Princess hotel for the purposes of forming a club to play under the Victorian rules. A club was formed and called the Reform Football Club. Thirty-three members were enrolled."
Captain; W. Sandilands, vice captain & secretary G. Page.
"From private letters I learn that a game has been played, and was a great success."
(Weekly Times p4)
.*Sandilands was to be the centre of controversy between Melbourne and Carlton in a match on September 27 this season.
The Reform Football Club (formed March 27 wikipedia) was the first team to play under electric light in the Southern Hemisphere, see May 30.

"Gold-topped flowed freely at Carlton on Saturday last, and the champagne was quaffed in honour of the formal opening of the new ground , yclept (by the name of) Princes Oval.
Members of Parliament, city councillors, and crowds of smaller-fry supporters of the club were present, and the proceedings went off with an eclat which must have gladdened the hearts of the members.
The ground was rather soft for playing on, but it is proposed to roll it in a week or two, when it will be everything that could be desired. The Mayor of Melbourne (Councillor Story) kicked off for the junior clubs of Carlton, twenty-five representatives of which were to play the Blues.
The match was, however, devoid of much interest, being too one-sided, Carlton eventually winning by six goals to none. The recent aquisitions shone out, and the club are particularly fortunate in gaining the services of the two new men, who were undeniably noticeable for their really splendid play. The orginal members of the team were quite up to their form, and I fancy the Blues will take any amount of beating this season. The juniors lacked confidence in play, but amongst them also there are men who will soon make their mark in the football world."
(Weekly Times p5)

"The St.Kilda have declined to meet the Melbourne this season, alleging as their reason that the Melbourne Football-ground is "too hard." Poor little dears!
Why do they not sell their footballs and buy croquet sets? I'm sure they would shine at the milder game. Croquet amongst "old women" is, however, very slow and uninteresting."
(Weekly Times p5) 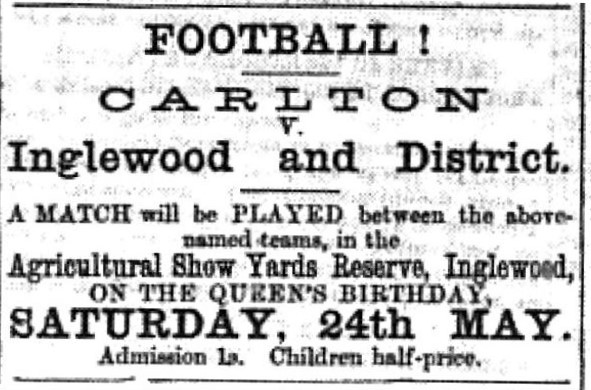 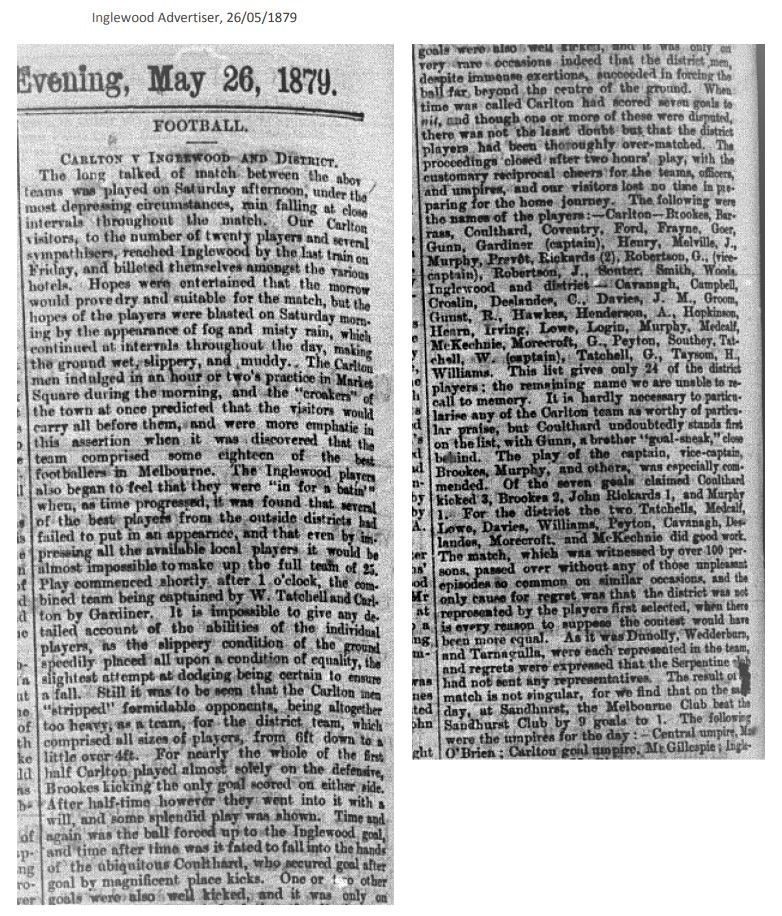 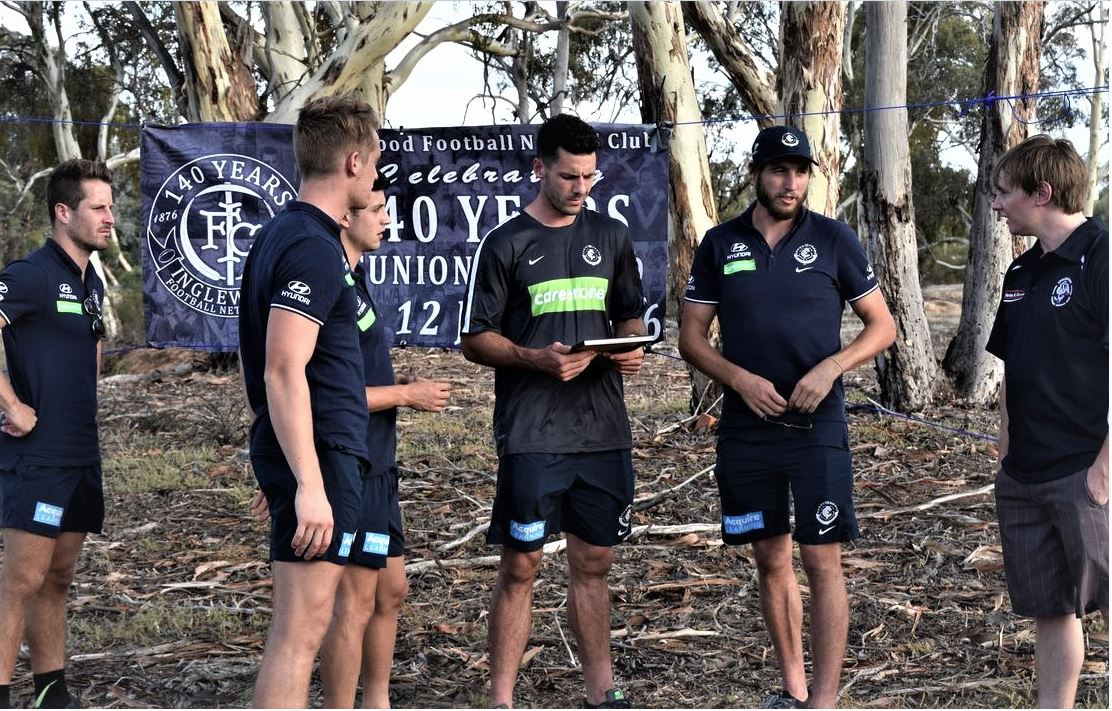 In Wellington New Zealand a game of football was played under electric light at the Basin Reserve.
The match was played in accordance with the Victorian rules of football, ie. Australian Football.
A crowd of 2,000 paid to enter the arena with many more watching from outside the ground.
See www.bigfooty.com/forum/threads/re-writing-of-australian-footballs-history.1040411/

The Reform Football Club (Wellington) presented a gold locket to "Mr. H. F. Smith the Government Electrican, in recognition of his services of the recent display of electric light on the Basin Reserve."
The inscription says;
"Presented to H. F. Smith, Esq, for kind assistance rendered to the Reform Football Club (Victoria rules), Wellington, 30th May. 1879."
(Papers Past (NZ) Evening Post, June 07 (p2) 1879)

May 31
Carlton played Albert Park at the South Melbourne C. G.
Admission was 6d which was for the construction of the a fence around the Albert's ground near the railway.
"The 'atoms in blue' were on the ground sharp at three o'clock, and as lively as a swarm of new-fledged cockroaches, eager for the fray, whilst the 'striped toddlers' as usual straggled onto the convincing arena as if they were cogitating in their craniums whether it wouldn't have been as well to have taken a taste of the blues at home instead of the country; however, the opposing commanders at last found out each other's whereabouts and then palavered, the result being that at twenty minutes past three the general of the Carltonians (Gardiner) arranged his men with their noses pointing towards the south pole, whilist the commander-in-chief of the Hillites marshalled his 'score' with their dittoes turned towards the northern lattitudes."
Albert Park kicked with aid of the wind.
"The ball, on being kicked off, was at once rushed up to the Alberts' stronghold by a terrific charge of the forward blues, headed by Coulthard, who was just prevented from kicking a behind by the slashing defence of Thomas and Latchford."
Albert Park through their player Lorraine's long kick into their forward line managed to score a behind.
"A glimpse of the sunshine of success irradiated the countenaces of the Albertians, and made their hearts flutter with emotion; soon to be clouded and depressed by the shades of disappointment and defeat. On being kicked off by Gardiner, the sphere was at once caught by Coulthard, and carried along the Alberts right wing with extraordinary momentum, eluding the grasp of half-a-dozen red and whites, when he was at last overthrown with great violence, the ball meanwhile bouncing out of bounds. On being thrown in the Slatters* failed to stop it, a moment of hesititation, and the ' the object of contention' was picked by by Robertson and kicked over to Gunn, which never missed fire during the engagement, and whose shot on this occasion heralded the totoal demoralisation of the ill fated Albertians."
"The ball was now kicked off from the centre, and followed up by a desperate charge of the Alberts, but it was of no avail, owing to the wretched bungling of a new arrival named Petrie, who proved himself to be about as fit to play football as a mon