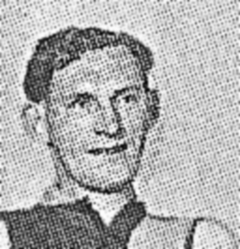 Shortly after the outbreak of World War 2 in September 1939, 20 year-old Gordon Cameron joined the Blues from western suburbs club Laverton. A barrel-chested defender who quickly came under notice for his determined, straight-through style, he made an impressive senior debut at half-back when Carlton beat Fitzroy at Princes Park in June of the following year.

Four weeks and four games into his career, his progress was temporarily halted when he was found guilty of striking North Melbourne’s Syd Dyer in another tough encounter at Princes Park. Cameron was suspended for two games, and promptly joined dozens of other VFL footballers by signing on for service in the 2nd AIF.

He came back from suspension to play in the second ruck (and kick his only career goal) against Geelong in round 12 in July, then reclaimed his preferred position of half-back flank for the remainder of the season. He ended his first year in Navy Blue guernsey number 9 with 10 senior games to his credit. Carlton finished fifth on the ladder, one game short of a finals berth.

When the 1941 football season began in April, Cameron was in uniform as a member of an Army Reserve transport company based in northern Australia. He spent almost a year itching for more active service, then applied for transfer to a front line unit. In January 1943, he joined the 27th Infantry Battalion and was pitched straight into the campaign being waged against the retreating Japanese forces in New Guinea.

By August 1945, after two Japanese cities were devastated by atomic bombs and their Emperor had agreed to end hostilities with an unconditional surrender, 24 year-old Lance-Corporal Cameron had spent two years helping to push the invaders back in the south-west Pacific. He was looking forward to home, an enduring peace, and the opportunity to play senior football again.

That opportunity came in round one of 1946. Melbourne was still buzzing in the aftermath of Carlton’s victory over South Melbourne in the infamous ‘Bloodbath’ Grand Final of 1945 when the traditional rematch took place at the Junction Oval, St Kilda, on Easter Monday, April 22. Wearing guernsey number 19, Cameron returned at half-back and put in a solid effort as the Blues followed up their Grand Final triumph with an 8 point victory, in a much more subdued performance by both teams.

He held his place in the side through the first six games, but then apparently had a serious difference of opinion with coach Percy Bentley prior to the June 1 clash with St Kilda. Cameron was left out of the team, and sat on the bench as 19th man when Carlton hosted Richmond at Princes Park in round 7.

He was back in the side to meet Collingwood in round 8 at Victoria Park, and although the Blues fielded a strong team with a half-back line of Cameron, Bert Deacon and Jim Clark, we were no match for a fanatical Magpie team that thrashed us by 56 points. Fingers were pointed and questions asked of many Carlton players in the rooms after that embarrassing loss, with Cameron apparently one of those singled out.

Whatever was said, and however it was said, has been lost or forgotten in the passage of time. What is certain is that Gordon Cameron ended his VFL career that day, and shortly afterwards crossed to Williamstown in the VFA. After settling into centre half-back with the Seagulls, he was soon regarded as one of the more rugged and reliable defenders in the competition. He played in two successive Grand Finals for Williamstown; the 1948 side narrowly beaten by Brighton, and the 1949 team that sensationally beat Oakleigh with the last kick of the match.

1939 April 20
Werribee Shire Banner
G. Cameron is on the Carlton training list. The paper says "Cameron is a young player who as a member of the Laverton team last year won the "Banner" trophy the best and fairest player in the Werribee Association."

1946 June 28 Friday
Williamstown Chornicle;
Gordon Cameron the half-back from Carlton secured his clearance from the Blues and will appear with 'Town in the lightning premiership.

1947 July 25 Friday
Williamstown Chronicle's report on last Saturday's Williamstown match said;
"Kisser" Cameron was not out in the cold when it came to relieving his half-back position. Gordon does not believe in the game of "tiggy." When he comes through he hits hard with shoulders and hips. He is right at his top now and giving the side his best football since coming from Carlton.

1952 July 11
Alexandra Standard and Yarck, Gobur, Thornton, Taggerty, and Acheron Express;
"Thornton Acheron Valley will be greatly strengthened by the inclusion of Gordon Cameron, who plays his first game next Saturday. A powerful type formerly of Carlton and Williamstown, he will take over the centre half forward position, and T.A.V. now can mould their side together for the finals."