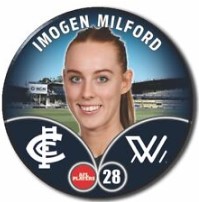 Carlton's AFLW side has added some attacking firepower at the 2021 NAB AFLW Draft, selecting Imogen Milford from the Casey Demons. A focal point of Casey’s attack in the VFLW competition this season, the 179-centimetre key forward ended the year as the runner-up in the goalkicking table, producing 19 goals from 15 games. Included in her prolific performances was a bag of six goals against Hawthorn, as well as three classy goals in a best-on-ground performance against eventual Grand Finalists Collingwood. Milford is a natural forward, using her height to her advantage while also applying pressure at ground level.