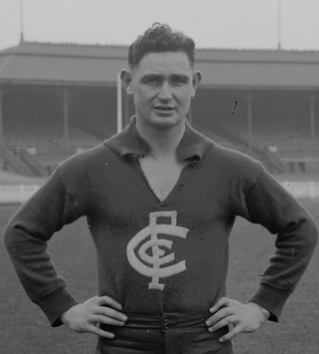 Another quality footballer whose career at Carlton was prematurely ended by military service in World War II, Jack Skinner was recruited from Bacchus Marsh, the same club that provided Carlton with star forwards Harry Vallence and Keith Shea. He started out as a speedy half-forward flanker, before evolving into a hard-working centreman whose third and last season at Princes Park was his best.

Prior to Skinner’s first senior game in 1939, Carlton selector Horrie Clover claimed that Jack was the fastest man over ten to twelve yards (11 metres) to have trained with the club. Skinner was also originally a right foot kick, but changed to his left when he found that it brought him greater distance. This obviously helped his cause, because he was the only new recruit to force his way into Carlton’s team for the opening round of 1939, on the day when the Blues unfurled their previous year’s Premiership pennant, before taking on South Melbourne at Princes Park.

Skinner played his debut match at half-forward - alongside Jack Wrout and Paul Schmidt – and the reigning Premiers thrashed the Swans by 9 goals. As the season progressed, Carlton often seemed hungry for more glory - but defeats by Richmond in both of our meetings, as well as a couple of other shock losses mid-year, saw the Blues tumble out of finals contention to a disappointing fifth-place finish by year’s end.

In September 1939, just as the VFL final series got underway, Australia was drawn into its second major conflict in a generation. Great Britain had declared war on Germany, so her dominions had followed suit. Within weeks, Skinner, and many thousands of other young Aussies volunteered for military service – just as their fathers and older brothers had done in the Great War of 1914-18. Jack joined the Militia, whose primary duty was the defence against invasion of Australia’s mainland.

He was off the field for most of 1940, but eventually came back into Carlton’s seniors for the round 14 victory over Collingwood at Princes Park in late July. Blues’ captain-coach Brighton Diggins was looking for more potency in attack that afternoon, and in an inspired move, asked Skinner, and regular centreman ‘Mickey’ Crisp to switch positions. Both men clicked in their new roles as Carlton ran out victors by 15 points, and from then on, Skinner was Carlton’s first choice for the pivot.

Even so, the Blues still ended up fifth again in 1940, before Diggins resigned his post to enlist for military duty. Former Richmond champion Percy Bentley was then appointed senior coach at Princes Park, with Jim Francis taking over as captain. Bentley followed Diggins’ lead by allocating the centre post to Skinner, and the long-kicking speedster repaid his new coach with a breakout season.

In a string of consistent performances in 1941, Jack didn’t miss a game as he forged a terrific understanding with his wingers Jack Carney and Bob Green. Together, this trio who loved to run drove the Blues to a string of wins, and the top of the ladder by round 15, when ‘Mouse’ Carney retired to sign on with the RAAF. Carney’s replacement was another free-running, promising youngster in 19-year old Vin Brown, who was a more than adequate replacement in Carlton’s surge to the finals.

In August of that turbulent year, while Australian troops were engaged in the desperate defence of Tobruk in North Africa, Carlton claimed the VFL minor premiership, and looked forward to meeting Melbourne in the second Semi Final. Having already comfortably beaten the Demons twice during the season, the Blues were chock-full of confidence. But on a wet and boggy MCG, Melbourne kicked nine goals to four in the first half, then hung on to win by 27 points.

Perhaps that match sapped a lot of the Blueboys’ energy; perhaps our confidence was shattered. Whatever the reason, Carlton hardly fired a shot in the Preliminary Final against Essendon, and were bounced out of flag contention by 25 points. By coincidence, ‘Mickey’ Crisp retired after the match, and Jack Skinner also bade farewell to return to life in the army. He probably didn't know it at the time, but his career with the Navy Blues had come to an end.

Over the following five years, Jack soldiered on in the service of his country. He rose to the rank of Corporal, and was finally discharged in June, 1946 – almost a year after the end of World War II, and nine months after Carlton defeated South Melbourne in the 1945 ‘Bloodbath’ Grand Final.