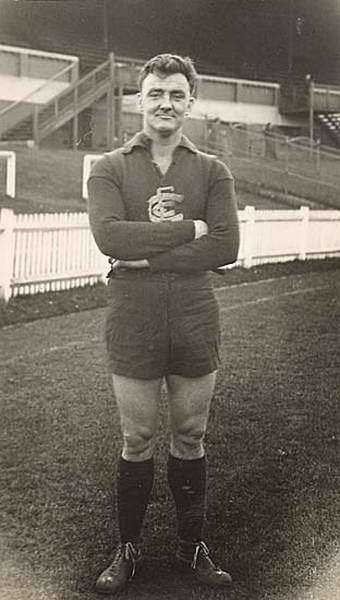 John Everett (Jack) Wrout began his VFL career at North Melbourne in 1931, but after 53 senior games in six seasons with the Shinboners, he became increasingly frustrated by a lack of opportunity. So he crossed to Princes Park midway through 1936, and became a star forward in Carlton’s 1938 Premiership team. Although a broken leg ended his playing career four years later, Jack spent the remainder of his life serving his beloved Navy Blues; at first as a tough, canny committeeman, and later, a legendary chairman of selectors.

Wrout was born in West Melbourne in 1911. Twenty years later he was starring for West Melbourne CYMS when North Melbourne offered him the opportunity he craved - to play VFL football. The youngster found it tough to break into the Shinboners’ senior side however, and wore the powder blue bars only seven times in his first two seasons. By 1936 – although Jack had eventually managed 50 senior games - the Northerners had not risen above eighth throughout his time at Arden St, and Jack had long realised that he could be a better player in a stronger team. So it was little wonder that he listened hard when the Blues made their pitch for him.

Powerfully built at 180 cm and 85 kg, Wrout’s game was built around his determination, his unselfish team play, and his long, accurate drop-kicking. At North Melbourne he had been played as a follower-forward, but when he crossed to the Blues midway through 1936, he was groomed as the team’s centre half-forward, and a potent attack was built around him. He wore Carlton’s number 28 guernsey for the first time against Fitzroy at Princes Park in round 12, 1936, kicking two goals as the Blues accounted for their visitors by 28 points. Later that same year, he experienced the atmosphere of finals football for the first time, when Carlton fell to Melbourne by 9 points in front of 55,000 roaring fans at a jam-packed MCG.

The appointment of former South Melbourne champion Brighton Diggins as captain-coach of Carlton in 1938 preceded an alarming early-season injury to Wrout; a setback that kept him out of action for much of the home and away season. In hindsight, however, it was a fortunate occurrence, because when he did return to the team, and kicked five goals against St Kilda in round 18, his addition strengthened the side at precisely the right time. After claiming the minor premiership, the Blues went into the final series with real momentum; destroying the reigning premiers Geelong by six goals in one semi-final, and setting up a Grand Final blockbuster against the previous years’ other Grand Finalist; Collingwood.

The enormous Grand Final crowd of 94,834 that packed into the MCG on Saturday, September 24, 1938 set a new Australian record for a sporting event, and they witnessed another fierce, skilful clash between the two best teams in the competition. Collingwood gambled and lost by playing their injured captain Albert Collier, while Brighton Diggins’ tactical nous – including instructing his flankers to push out wide to the wings, to give Wrout plenty of space to use his marking skills one-on-one against Collingwood’s Marcus Boyall – paid off superbly, and brought the Navy Blues our first flag for 23 years. Carlton’s heroes in a 15-point victory were rover Jack Hale, captain Brighton Diggins, and Wrout, who finished the match with four goals and provided a reliable avenue to goal all match.

Jack continued playing consistent football for another four years after that triumph, and a strong case could be made that he just got better with age. Although his score was a modest one, he was Carlton’s leading goal-kicker in 1943 with 33 majors, and by round 18, 1944 was playing his 97th consecutive game for the Navy Blues. In that controversial and costly match against Footscray at Princes Park – a game that would decide which of the two teams would play in the finals - Wrout’s charmed run of injury-free matches ended when a Footscray player fell across his lower leg, and broke it just above the ankle. While Jack was being taken to hospital, the final siren sounded with the scores level, but with Bulldog centreman Harry Hickey having been awarded a mark 55 metres out from goal.

Needing to save a score at all costs, Carlton packed the goal-mouth as Hickey launched a sweetly-timed drop-kick that landed right on the goal line, and the Blues fans roared as Bob Chitty appeared to mark the ball inside the field of play. But the umpire ruled that Chitty’s mark was completed over the line, and awarded Footscray the point that won them the game. The Blues were tipped out of the finals, and Jack Wrout’s playing career was over.

In the years afterward, Wrout continued to serve the club in a variety of off-field roles. He was elected to the club committee in 1958, and went on to hold the position of Vice-President for twenty years. Throughout that time, which saw three more Premiership flags unfurled at Princes Park after Grand Final triumphs in 1968, 1970 and 1972, Jack was also a highly-respected, no-nonsense chairman of selectors. In 1978, after more than 30 years of committed service to the Carlton Football Club, he resigned from the committee due to ill-health, and was replaced by Wes Lofts.

One of the most influential Blues of his time, Jack passed away on the 16th June, 1981 at the age of 69. Eight years beforehand, his strapping son John (Junior) had filled his father with pride when he had been appointed captain of Brunswick in the VFA. In turn, John Jnr surely felt a surge of joy when his father’s name was added to the Carlton Hall of Fame in 2016.