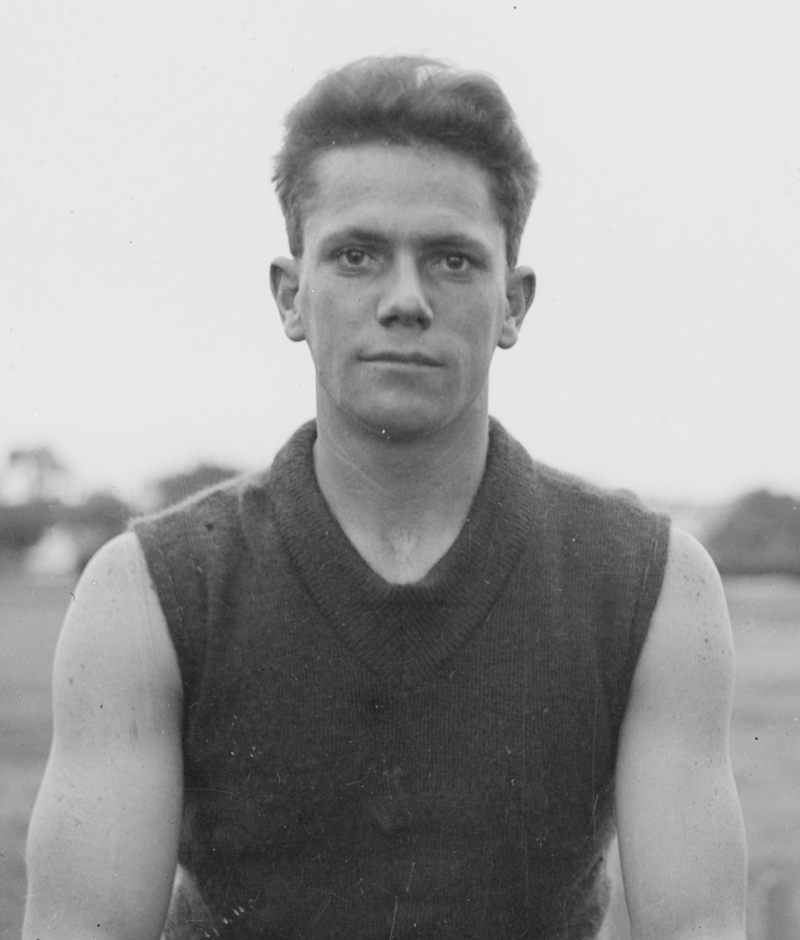 Brighton Diggins played just 31 games for Carlton over three seasons, yet he stands as one of the most influential figures of his time. Not just for what he achieved on the field, but more for the example and the inspiration he provided off it.

John Bryton Diggins was born in Victoria Park, WA in 1906 - one of twelve children. He led a carefree, typical bush kid existance and grew into a tall, superbly fit young man. He adopted his middle name after his family started using it, and he preferred the spelling of 'Brighton' after an uncle of the same name.

After playing junior football for his local club, Jolimont, he was invited to train with Subiaco, and ran out for his first game with them 1927. By 1929 he was one of the stars of the WAFL. The Depression was tightening its grip on Australia and times were hard, so when South Melbourne came calling with a bag of money in 1931, Brighton decided that his future lay in Victoria.

After one of his early games for the Bloods, the Argus Newspaper wrote; 'He has height, weight, strength and pace. He marks and kicks extremely well, and for a big man, he turns remarkably.' He joined a club on the rise; the famous Foreign Legion. With players recruited from all over the country, South swept to the 1933 Premiership, beating Richmond by 18 points. Leading the ruck and changing with Bob Pratt at centre half-forward that day, Brighton Diggins was one of South's stars.

The Swans continued as a force, but over the next three years they stumbled at the last hurdle to be beaten in successive Grand Finals by Richmond and Collingwood (twice). South's cause was not helped by injuries to key players including Diggins, who broke a leg above the ankle. The disappointment and frustration of those three losses sent South into a tailspin. Anger and vindictiveness, soured further by sectarianism from a predominantly Catholic administration, eventually forced Diggins (a Protestant) to consider his future.

Meanwhile, Carlton was the team also in danger of losing momentum. We had made the finals in 1933, '35, and '36, but were obvious underachievers. Vice-President Sir Kenneth Luke was convinced that Diggins was the leader Carlton needed and set out to get his man. Despite a more lucrative offer from the Perth Football Club, Diggins finally agreed on terms to captain-coach at Princes Park in 1938.

Diggins' positive influence began on his arrival. His new team-mate Micky Crisp said later; 'From the moment he walked into that training room, he showed himself a gentleman. He was determined, he was forceful if needed. He never was a bully. His soft way of speaking might have suggested to some a lack of leadership - that was their funeral. Diggins was a man's man - that's where he succeeded. He drove us, he led us, but he always went with us. He was game. He never once asked us to go in where he would not go himself. I might have said in a shorter fashion that he won our confidence.'

By this time, Diggins was thirty-one years old, but he pushed himself as hard as he pushed his team. Training was relentless, yet innovative. When the season began, the Blues were fit and ready. The turning point came mid-season, when Carlton rallied late in the game to snatch a one point win over arch-rivals Richmond in a fierce, physical encounter. With their confidence boosted, the Blues finished on top of the ladder and three weeks later, faced Collingwood in the Grand Final.

Before the game, Diggins said; 'Every man has a job to do and will not let Carlton down. We have no champions. Every player helps his team-mate and puts the team first.' Before a record crowd of 96,834, Carlton won a thriller by 13 points. Rover Jack Hale was generally considered Best on Ground, but Brighton Diggins' leadership was outstanding.

Before the Grand Final, Diggins had announced that win or lose, it would be his last game. Ken Luke would not hear of it however, and talked his captain into pulling on his number 5 guernsey for one or two more seasons. Carlton finished fifth in 1939, and it was the first time that Brighton Diggins had played for a VFL side that had missed the finals. Injuries again dogged him in 1940. He played only five games before World War 2 intervened, and duty called. His brief but successful time at Carlton was over.

After the War, Brighton coached Mornington Peninsula League side Frankston for some years, and took them into three successive Grand Finals - only to be beaten each time by a powerful Hastings team with a young John Coleman at full-forward. Later, he became a popular football correspondent for the Argus. Brighton Diggins passed away at Mt Eliza on the 14th July, 1971 aged 64.

In 2002, Brighton’s daughter Lauraine Diggins became the first woman elected to the board of the Carlton Football Club. A highly successful dealer in fine art – especially Australian works - she was the Managing Director of Lauraine Diggins Fine Art, and of course, a passionate Blues supporter from birth.

In May of 2008, Brighton Diggins was further honoured by being named on the half-back line of the Subiaco team of the century.

1943 Brighton Diggins was a Warrant Officer in the Army.
Award For Former Footballer; click here> http://nla.gov.au/nla.news-article11340715
While coach of Frankston, Brighton Diggins and Carlton secretary H. Bell arranged a match between Frankston and Carlton which was played on Labor Day, Monday April 26, 1948.
Proceeds from the match went to the Frankston Football Club's Injured Players' Fund.
Frankston 17.10.112 defeated Carlton 15.9.99