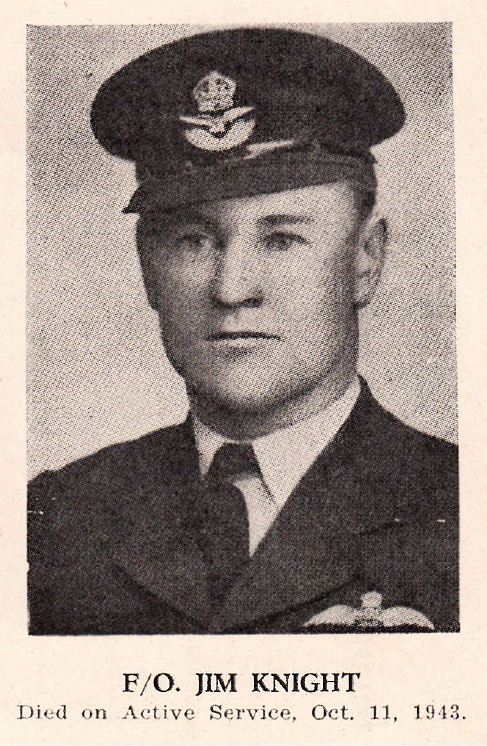 In the darkest days of the Second World War, in October 1941, The Geelong Football Club announced that it was going into recession until the conflict was over. All of its players were then free to join other clubs, until such time as the Cats decided to rejoin the competition.

Geelong’s Best and Fairest award winner that year was Jim Knight; a strong, tenacious rover/forward recruited by the Cats from Geelong Scouts. In two seasons at Corio Oval, Jim had played 42 games and booted 54 goals. A fitness fanatic who could run all day, he was one of the Cats' most popular players, and widely regarded as a future captain.

Jim had already volunteered for active service with the RAAF prior to Geelong’s withdrawal. But Carlton’s newly-appointed coach Percy Bentley was an admirer of the Geelong speedster, and convinced him to keep his football skills up to scratch by pulling on the number 11 guernsey for Carlton when his military training allowed.

Jim Knight played just 15 games for the Blues in 1942-43, but impressed everyone around him with his attitude, his ethics and his football ability. In June 1943, he played his last game for Carlton (against Collingwood at Princes Park) before he was sent to join in the fierce battles against the Japanese in New Guinea.

Both football clubs joined Jim's family and the wider community in mourning, pledging to commemorate him. Geelong donated a trophy to the Carlton Football Club in Jim’s name, and it was presented to the Blues’ Best and Fairest winner (Bob Chitty) in 1944. The Cats also decided that from that same year on, the annual award to the runner-up in their Best and Fairest would be known as the Jim Knight Memorial Trophy.

"Little Jimmy Knight played first with Geelong and when they suspended operations during the war he joined Carlton. During his training he played many a fine game with the Blues. Clean, and fair as his hair, he tried to save a loaded bomber which he could not get off the strip. He was found at the controls still striving to lift the plane."
H. A. de Lacey, fallen footballers - Sporting Globe August 15 1945 (p14) the date, VJ Day.