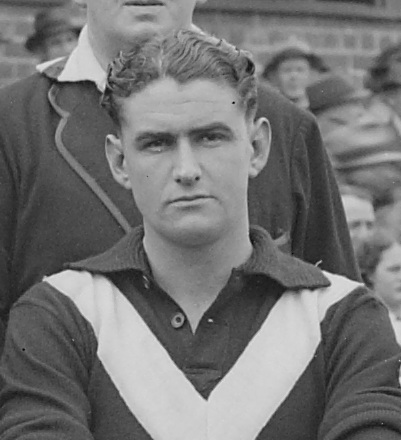 A defender recruited from VFA club Preston, Arthur Sleith played five matches for Carlton while on leave from the Air Force during World War II. He wore three different guernsey numbers during his brief stay at Princes Park, and also began three of his five games from outside the boundary, as 19th man.

Sleith was born at Murtoa in western Victoria in 1917, but by 1941 he was living in Preston and playing football each winter weekend for that suburb’s VFA team. In August of that year, Sleith enlisted for service with the RAAF. He played out the season at Preston while undergoing basic training, until the VFA announced that it was going into recess in 1942 because of manpower shortages. At the same time, Geelong dropped out of the VFL for much the same reasons.

Therefore, all the remaining eleven VFL teams welcomed an influx of personnel from the dormant clubs. Carlton picked up two fine players from Geelong in George Gniel and Jim Knight, as well as others from the VFA including Sleith from Preston, future Blues captain Bob Atkinson from Coburg, and his namesake Wilf Atkinson from Sandringham. All of these recruits, along with a future champion in Jack ‘Chooka’ Howell from bayside Chelsea, made their VFL debut for Carlton against South Melbourne at Princes Park in round 2, 1942.

Wearing guernsey number 26, Arthur was assigned to the back pocket for that first game, but it wasn’t an auspicious occasion. South controlled the match all day, and only wayward kicking for goal kept their final winning margin to forty points. Another loss followed the next week at Windy Hill, when Carlton went down to Essendon in a 5-point thriller.

Arthur was then called away for duty, and couldn’t be considered again until July, 1942. Home briefly on leave, he wore number 20 when he sat on the bench as 19th man in Carlton’s 28-point, round 10 win over Melbourne at the MCG – a welcome victory highlighted by eight goals from Carlton’s brilliant forward pocket Paul Schmidt.

Three weeks later, Arthur warmed the bench again when the Blues met South Melbourne in the return match at Princes Park. The Swans’ errant kicking hadn’t improved – once again, they had more scoring shots than Carlton, yet still lost by five points in what turned out to be Sleith’s last game for the year.

Arthur waited another nine months for another opportunity, and eventually made his fifth and last appearance for Carlton in round 4, 1943, at home against Collingwood. This time wearing guernsey number 22, he began the game from the bench, but made it onto the ground earlier than expected when back pocket Ted Tuohill was injured in the first quarter. Collingwood proved too accomplished after quarter time however, and finished up winning by 27 points.

After that, Sleith was sent to Darwin, where he served for the duration of the war with an aircraft recovery unit, finding and transporting crashed or damaged aeroplanes to repair depots. The war eventually ended in August 1945, and Corporal Arthur Sleith was discharged a few months later. He gave some thought to having another crack at VFL football, but decided instead to return to Preston to finish off his career.

When his playing days were over, he moved on to coach at Jerilderie (NSW), then to Yeoman in northern Tasmania, before returning to Victoria to manage the Hotel Sarsfield and then the Malmsbury Hotel (see Image Gallery). He spent his later years at the family home in West Preston, and passed away on 17 December, 2008 at the age of 90.