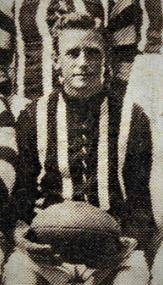 Part of a remarkable footballing family, Johnny Downs played briefly at senior level for both Fitzroy and Carlton. During a long and varied life, he also served his country in two world wars. He was the brother of Lyle Downs, and the cousin of Tommy and Albert Downs. Lyle and Tommy were both stars at Carlton, while Albert played one game with Collingwood in 1933.

In 1913 Johnny Downs began his VFL career at Fitzroy after being recruited from Fitzroy District. He played twice with the Maroons, then in August 1914 was among the first to volunteer for active service when Australia joined Great Britain in declaring war on Germany. Johnny was trained as a signaller, undergoing his baptism of fire in the costly failure of the Gallipoli campaign of 1915. He was stationed in Egypt and the Middle East throughout the remainder of the Great War, and was promoted to the rank of Sergeant before returning home to Australia in 1919.
His service number was 5064

By then his younger brother Lyle was building a fine career at Carlton, and it was probably Lyle’s influence that convinced 30 year-old Johnny to have another go at playing at the highest level. That aspiration was realised when both brothers were selected in Carlton’s senior team to play Collingwood in round 8, 1920 at Victoria Park. Johnny played on a centre wing, with Lyle roving. But on that warm Saturday afternoon, a packed house saw Collingwood kick away to an early lead, and maintain their advantage throughout for a convincing 19-point win. Johnny was among those who paid the price for that loss - he wasn’t selected again all season – and so gave the game away at the end of the year.

In the years afterward, Johnny and his family moved to the bush. They were living at Camperdown in Western Victoria when another catastrophic war began in September, 1939. Although he was by then approaching 50 years of age, Johnny volunteered again to serve his country. He was quickly accepted, and posted to a home defence signals unit, where his previous wartime experience proved valuable until he was eventually discharged in January, 1947.
His service number was V375609

The Camperdown Chronicle, 2 September 1939, in an article on past players for Camperdown says;
"Another man who had Melbourne experience was Jackie Downes from the Carlton club and he, too, was a big factor in the Magpies success, not only through his coaching of the eighteen, but also as a player."

Peter Hall receives the No.31 from Ron Barassi.