Carlton got off to a slow start in 1920, winning only three of its first eight games. The Blues were languishing in seventh, but luckily the season had been relatively close, and the club found itself only one game away from third spot on the ladder. After a bye in round 9, the club found winning form for the remainder of the home and away season, winning 7 of its last 8 games to storm into third place on the ladder and into finals action.

The club continued its winning form in its first final, easily accounting for Richmond in the second Semi Final, 7.11 (53) to 4.6 (30), in front of 62,220 people at the MCG. In the Preliminary Final a week later, Collingwood got off to a storming start, kicking 5 goals to 1 in the first quarter. The Pies managed to hold this lead all day, running out 24 point winners, 12.11 (83) to 8.11 (59). Collingwood would lose to Richmond in the Grand Final the following week.

The improved end to the season would for the club would provide the basis for a strong start to 1921, when the Blues wouldn't lose until round 13, and would contest a Grand Final. 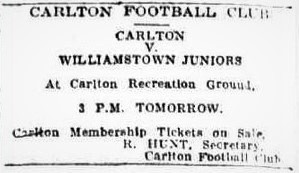 A suveyor's plan had been drawn up for a football ground which would be free from cricket control. The proposed ground would be 200 x 150 yards and capable of accomodating 50,000 people. The site is the former Exhibition Oval cycling track. Other sports would be able to use the ground which is located in the Exhibition Gardens. (Argus October 13)