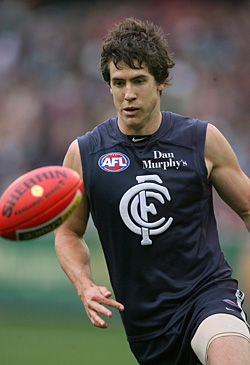 South Australian Jordan Russell was Carlton's first selection in the 2004 National Draft at pick number 9. A slimly-built, free-running wingman from West Adelaide in the SANFL, he had begun his football career at Edwardstown, in Adelaide’s outer southern suburbs, although his heritage can be traced back to New Zealand in generations past. At Carlton he was handed the honour of wearing the club’s number 2 guernsey - which interestingly, had also been worn by the only other Russell to have played for the Blues; Joe Russell, way back in 1922.

In his debut year, Jordan found his feet in the VFL with the Northern Bullants, at first up forward, but later across half back, where a string of consistent efforts eventually brought a call-up to Carlton’s senior team for the round 15 match against St Kilda at Docklands Stadium. Named on the bench, the shaggy-haired youngster got only briefest of opportunities as the finals-bound Saints crushed the struggling Blues by 80 points. “We got pumped,” he said, some years later. “I spent about half an hour on the ground, didn’t get much game time, and only had a couple of possessions. So I put that one away and forgot about it.”

Plenty of time in the gym over summer and an honest pre-season gave Russell the improved strength and fitness to push for more senior opportunities in 2006. They came in round 4 and 5, and again in rounds 11 to 19 – all off the bench - and it wasn’t until three weeks before the end of the season that he was named in the starting line-up for Carlton’s clash with Hawthorn at the MCG. Still, ten games in his second year was a good effort – highlighted by a cracking second half against West Coast in round 11 and his first career goal in round 17 against the Fremantle Dockers.

After that encouraging start, Russell’s management created a stir in the off-season when they told Carlton that he wanted to return home, and had asked for a trade to Port Adelaide. The Blues flatly refused of course, and in turn put a new two-year deal on the table that was eventually signed in October. It had only been a ploy – albeit a safe one - by his agent, and Jordan had never intended to leave.

Over the next three seasons, the Navy Blues embarked on the long road to redemption, in the wake of the worst five years in club history. Energised by some savvy draft selections, a new committee and the sensational recruitment of champion midfielder Chris Judd, the Blues were once again on the rise, and Russell’s emergence as a creative defensive sweeper was one of the factors. Established in Carlton’s best 22 at half-back, he averaged 19 matches per year between 2007 and 2009, with a handy aggregate of 13 goals over the same period. He could play in the midfield when necessary, and he knew where the goals were.

In 2009, Russell fell into a brief form slump mid-season. He was sent back to the Bullants to freshen up, and that proved to be a turning point, because the rest of his year was outstanding. After an absence of eight long years, Carlton returned to the finals at last that September, when Jordan and most of young team-mates experienced the adrenalin rush of finals football for the first time in their AFL careers at the Gabba in Brisbane – facing the Lions in an Elimination Final. The young Blues matched the home side throughout on that warm Saturday night, and in the second quarter Russell lit up the ground when he streamed through the centre square and kicked a beautiful long goal to keep his team in front. Carlton stretched their lead to 24 points at the last change – but couldn’t hold off a steadier Brisbane in the last ten minutes of the match, and lost by a heart-stopping 7 points.

Over the following twelve months a stronger, fitter Russell emerged as one of the Blues’ more important contributors in a break-out year at half-back. He put in a super game in round 7, 2010, collecting 35 possessions and 14 marks in a huge 61-point win over the previous year’s Grand Finalists St Kilda, and didn’t miss a match in a year that concluded with another desperately close Elimination Final loss – by 5 points - to the Sydney Swans at the Olympic Stadium. By then, Russell’s aerial skills, ball-winning ability and excellent delivery by hand of foot had made him a viable All Australian contender, and it took a champion in Chris Judd to edge him out of Carlton’s Best and Fairest award; the John Nicholls Medal.

In 2011, Jordon was appointed to Carlton’s Leadership Group, and his influence at half-back was one of the reasons why the Blues were firmly entrenched in the top four by the half-way stage of the year. In round 7, he celebrated his 100th AFL game with a 3-point victory over St Kilda on a Monday night at Docklands, when the Blues unveiled a new (but not universally popular) light blue clash strip. And by round 16, he hadn’t missed a game all year.

But after that, things went awry, and Russell’s future was called into question. Said to have been injured during Carlton’s shock loss to the Western Bulldogs early July, Jordan was omitted from the side, and for the next eight weeks, ran around in the red and white strip of the Northern Bullants. His absence caused conjecture of course, and Blues fans were reminded of coach Brett Ratten’s pledge that any Carlton player who signed with the AFL’s newest club; Greater Western Sydney (due to join the AFL in 2012) would never play with the Blues again. Amid luke-warm denials from both sides that there was any sort of problem, Russell was recalled for Carlton’s round 24 clash with St Kilda. But after the Blues lost a lacklustre contest by 20 points, he was omitted once more, and not selected for either of Carlton’s finals matches.

Russell fared little better in 2012, appearing in only seven games at senior level, and rarely in his preferred position at half-back. Despite a late-season resurgence in form with the Northern Blues, in September the club announced that Russell had requested a trade to another club under the unrestricted free agent rules. "It was very much a mutual decision," Russell's manager Marty Pask said, shortly after the news hit. "Both parties thought that it was in the best interests of Jordan to explore his opportunities as a free agent. It's just the time where Jordan needs to look for an opportunity where he can play senior footy consistently, and Carlton aren't going to stand in his way. He wants to play that role as a rebounding defender, which he has obviously been pretty good at doing in the past, finishing high up in the club's best and fairest count.”

After some weeks of rumour and conjecture, a deal was eventually reached, and Russell was traded to Collingwood in exchange for pick 71 in the 2012 AFL National Draft. 'Rusty' left Princes Park with plenty of appreciation for his efforts in Navy Blue over the years. In particular, his game in the 2010 Elimination Final will stick in our memories for a very long time.

After the single season of 2013 with Collingwood, Russell was delisted by the Magpies, he played nine games.

Russell then headed to the VFL for the 2014 season to line with Footscray the Western Bulldogs affiliate team, he would also fill the role as a development coach. He was elevated to co-captain in 2015, then outright captain in 2016, and he captained the VFL state team against the SANFL in 2016. He captained the Bulldogs to two VFL premierships – the first in 2014 as the stand-in Grand Final captain, filling in for injured co-captains Nick Lower and Lukas Markovic, and the second as appointed captain in 2016. Russell retired from the VFL at the end of 2017.

1991 - Rhys-Jones sees an opportunity to dunk an umpire.