A No.7 pick, traded to Adelaide before his time 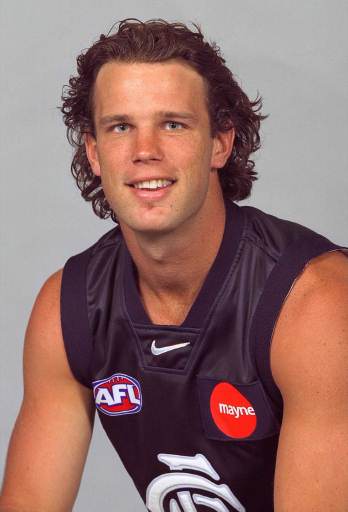 
Taken with Pick #7 in the 1997 National Draft, from the Dandenong Stingrays, Massie was a star Centre Half Back in school (Glen Waverley High School) and junior league football. Originally likened to Carlton legend Stephen Silvagni for his bow legs, long hair and occasional brilliant and desperate marking, Massie was expected to become a key defender for the next decade.

At 188cms, this was going to be difficult. Massie didn't grow any more, and the Blues set about using him as a half back flanker and occasional midfield tagger. Some promising games and a Rising Star nomination on the one hand, a fair few games in the reserves on the other: Massie showed a bit but not enough to command a spot in the team. Injuries didn't help either.

After debuting in Round 8 of his first year, he did not play again until round 15, but then played all remaining games that year. In 1999, he played a similar pattern, one game in round 2, before playing every game bar one from Round 14 through to being a member of the losing Grand Final side. In 2000 he played the first 5 games but then suffered a cheek injury, which would keep him out until Round 16. He returned to play another 5 games, but they were mostly from the bench and he would fail to gain double figure possessions in any of them, before losing his place in the team just prior to the finals. He appeared to have finally cemented a place in the side in 2001, playing the first 11 games, before breaking his leg against Richmond. He would not be able to play again that season.

Massie had by that stage played 43 games. At the end of 2001, it was decided to trade him for injury prone ex-Victorian, Adelaide Crows premiership player Andrew Eccles. Eccles would have little impact at Carlton, playing just 13 games before being delisted at the end of 2003. Massie played 41 games at the Crows from 2002-4, but only 3 in 2005. However, over 2006-2007 he found himself a more-than-useful player in the emerging Crows defence, before being delisted at the end of Season 2008 with a total of 131 games to his name, a good effort in anyone's language. Massie signed on for SANFL club Norwood for the 2009 season. Kris was signed up by the Glenelg Tigers to be their U/18's coach for the 2010 season, and by mid Season 2011, he'd moved up to become their senior Coach! Massie would become the second ex-Carlton player to coach 'The Bays' after John Nicholls.

Massie was originally recruited from Edithvale-Aspendale.

Massie was born in Sweden.

Articles: Carlton's Top Tenners | That First Pick...Players taken with Carlton's first pick in the draft | The Fish that Got Away