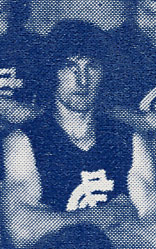 Lance Styles played his first senior match for Carlton on the day following his 22nd birthday, and his last game one week after he turned 23. A ruckman-forward recruited from Northern Tasmanian Football Association club Scottsdale, he wore the Blues’ number 35 guernsey at senior level only three times in two seasons, but later became an outstanding VFA player with the Waverley Panthers.

Styles was one of two Tasmanians to debut for Carlton in round 14, 1973, when the Blues squeezed into the confines of Glenferrie Oval to take on Hawthorn. The other new Apple Islander that day was Craig Davis, who lined up alongside Styles and Barry Armstrong at half-forward. Armstrong was lively and dangerous all match and kicked four goals, while the other two were rarely sighted as Carlton was well beaten. The following week, Styles was relegated to the bench for round 15, when the Blues rebounded and destroyed Melbourne by 41 points at Princes Park. But after that, he had to wait a full year for his next opportunity.

Eventually, that moment came in round 15, 1974 at the MCG – however it was Davis who showed real potential, with five goals in a team thrashed by Richmond. Playing as a back-pocket ruckman, Styles was handy at best, so it was no surprise that he was omitted from the team before the next game. Then, at the end of the season, after two mediocre years, Lance was cleared to Subiaco, WA. Carlton probably hoped that he would blossom into a star with the Maroon and Golds, and build some credit with one of Perth’s strongest clubs. Unfortunately, that was not the case. Unsettled and homesick, Styles insisted on coming back home to Victoria, and landed at Waverley in 1976.

With the Panthers, Styles added weight to the old football maxim that ruckmen take a long time to develop. He turned 25 during his first season, on the way to winning Waverley’s Best and Fairest award. Three years later in 1978, he won it again, capping off a stellar year in which he represented the VFA against Queensland in Brisbane, captained his club, and won the Field Trophy as Best and Fairest in 2nd Division. He retired in 1983 with more than 100 games to his credit, and a reputation as one of the Panthers’ best-ever ruckmen.

1909 Semi Final at the MCG; Carlton vs Essendon..jpg