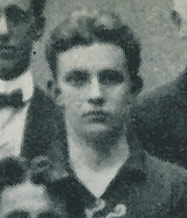 
He was with the Education Department and had been transferred to Melbourne.


He debuted for the Blues in 1918, after crossing from Geelong High School via Geelong. He was born in Ballarat East.

In 1917, his made his debut with Geelong as a 16 year old, he played five games and booted two goals in his only season with the Cats.