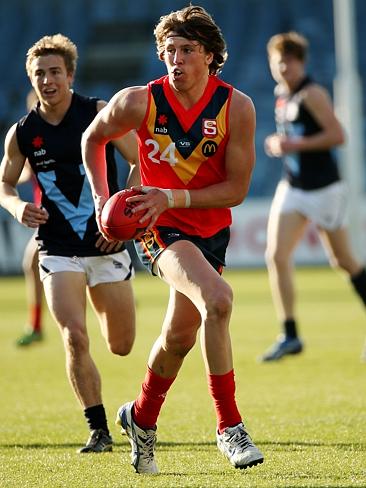 
South Australian Luke Reynolds came up through the ranks at Port Adelaide to be Carlton’s first selection at number 12 in the 2013 Rookie Draft. An agile, mid-sized forward with a powerful left foot, he was drafted by the Blues after inspiring South Australia to victory in the 2013 AFL Under-18 Championship.

"He's definitely a talent,'' said Reynolds' former coach at the Magpies, Ken McGregor, on the eve of draft week. “He's a very good kick, and he's got some good strings to his bow. Because of his size and agility, he's a very difficult match-up for defenders, and can turn taller guys inside out.”

However, after arriving at Princes Park, Reynolds spent all of the 2014 season playing at VFL level with the Northern Blues. Despite flashes of brilliance, such as his match-winning two late goals against Frankston in only his second game, Luke was unable to maintain consistency throughout the year, and was delisted at season’s end.

Reynolds picks up where he left of as contracted SANFL player.
https://www.portadelaidefc.com.au/news/140368/reynolds-picks-up-where-he-left-of-as-contracted-sanfl-player