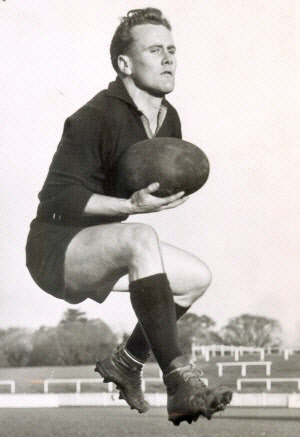 If only three words were allowed to sum up Laurie Kerr as a footballer, then they would surely be speed, aggression and courage. A blisteringly-quick winger, centreman or half-forward flanker, Kerr was a star player in a bleak period for the Blues from 1950 to ’59, and later, an influential figure in the Carlton Football Club for more than thirty years.

Recruited by the Blues from inner-suburban Auburn, Kerr was a former Victorian schoolboy sprint champion who mixed football with professional running and won a number of sprint gifts in his late teens. At Carlton he quickly established himself as a winger who played with passion and tenacity. Carlton fans came to love his commitment, while the opposition supporters feared his “take no prisoners” approach. In an era of small, clever centre line players, Kerr’s 178 cm, 79 kg frame made him a daunting prospect. He was simply bigger and quicker than his opponents. He may not have been as skilful as some of them, but he was a superb team player who tackled, chased and shepherded to exhaustion.

Carlton made the finals just three times in the fifties, and lost each one of their four appearances. Kerr’s individual honours in that period included State selection in 1952, and vice-captaincy of the Blues in 1956, ’57, and ’58. He wore guernsey number 11 in each of his 149 games, and kicked 48 goals.

When his playing career ended, he founded a highly successful public relations company; International Public Relations, which rapidly grew into one of the country’s biggest. Meanwhile, he worked tirelessly behind the scenes at Carlton and was a highly influential networker for the club. Few major decisions of any kind were made at Princes Park without Kerr’s knowledge or approval, and he was a key part of every Carlton Premiership from 1968 to 1995. At the same time he was also a very private person, who never sought publicity for himself.

In May 2000, Laurie Kerr was named as an emergency in Carlton’s Team of the Century. Barely 12 months later, he passed away at the age of 72.

In 2016, Laurie’s grandson Patrick Kerr was recruited by the Blues in the National Draft, and allocated guersey number 36.

Laurie's brother John, a backman, had a try out with Carlton early in 1952. John had returned to Australia after three years playing soccer in Yorkshire England. It is unknown if he played in the Reserves. There is an image of John in Laurie's image gallery. Is this the same John Kerr who was BOG in Footscray's 1954 Grand Final win?

Laurie Kerr and his wife Vivienne produced three sons, all of whom played for Carlton at various levels. Peter Kerr was the most successful, playing 39 senior matches between 1967 and 1970. Mark Kerr spent 7 seasons at Princes Park and played 69 Reserves matches. He was promoted for just the one Night Series game in 1981, but didn’t play senior football. The third Kerr brother; Stephen Kerr played one season with the Blues' Under-19s in 1986 (and is also the father of Patrick).