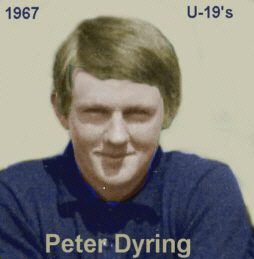 He was listed in the Carlton Senior list from 1966 to to 1968. Overall Dyring played 54 games at both levels.

In 1967 he was listed on Carlton's Supplementary list at the beginning of the season and in 1969 he was listed under to be considered when available.

Dyring has been a supporter of the Blueseum, providing pictures and reports of his time at Carlton. Dyring reported that given his age, the Club would arrange a taxi to collect him from school (Box Hill Technical) and take him to training. Dyring was shown around the Club Rooms by Gerald Burke (secretary at the time). After training with the team, Dyring was introduced to Ron Barassi who gave a 'very strong presentation on where Carlton Football Club was heading, and why. He determined that if we wanted to be with a successful VFL Club, then Princes Park should be our second home'!

The pictures are summarised in the link below.

On Saturday June 01 1968 Carlton played an exhibition game v St.Kilda on the SCG in Sydney.
The curtain raiser for this match was VFL Reserves v NSW XV111. Peter Dyring was named in the Victorian team squad.