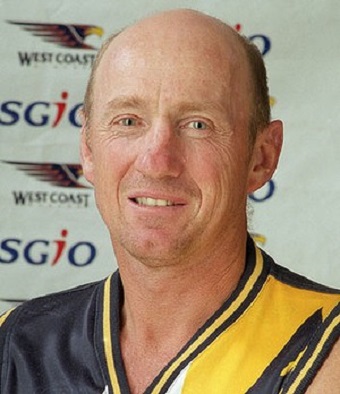 Director of Coaching and Development

West Australian Robert Wiley joined the Carlton Football Club in October 2012 in the role of Director of Coaching and Development, after a personal approach from newly-appointed Blues senior coach Michael Malthouse. Wiley brought with him a wealth of football experience, and a CV packed with a glittering list of achievements.

One of WA’s all-time great rovers during his playing days, Wiley started his senior career with WANFL club Perth in 1974 and won the Redlegs’ Best and Fairest in his debut season. Blessed with lightning pace and keen goal sense, he was a member of Perth’s 1976 and ’77 Premiership teams, and by the end of his career had won the club’s Best and Fairest an extraordinary eight times. He had also kicked 10 goals in a match on two occasions, and represented WA more than a dozen times.

In 1979 Wiley was recruited by Richmond, where he and Malthouse were team-mates in the Tigers’ 1980 VFL Premiership side. After 95 games and 127 goals at Tigerland, and twice wearing the big white vee of the VFL in interstate matches, Wiley returned to Perth in 1984. By 1987 he had played 178 games for the Redlegs and was nearing his 33rd birthday, but the newly-formed West Coast Eagles needed experience and leadership, so they didn’t hesitate to recruit him for their debut season in the AFL.

Wiley justified the Eagles faith in him, kicking 24 goals in 18 matches before retiring from the field and taking up the reins as senior coach at his home club Perth. In 1990, Malthouse replaced John Todd as coach of the Eagles, and two years later, Wiley agreed to become Malthouse’s assistant. West Coast won flags in 1992 and 1994 before Malthouse was lured back to Victoria by Collingwood, but Wiley stayed on and his tenure with the Eagles eventually stretched to 15 seasons and a third Eagles Premiership in 2006.

Wiley coached the WA State of Origin team in his own right in 1998, and from 2007 until being recruited by Carlton was heavily involved in junior player development as manager of WA’s Under 16 and Under 18 state programs, while also commentating on AFL matches on radio and television.

In one of his first media interviews after arriving at Princes Park, Wiley explained that his mission at Carlton was two-fold. Firstly, to assist the Carlton coaching panel in implementing Malthouse’s edicts on the training track “so that we train the way Mick wants us to play” and secondly, to assist with the development of all listed Carlton senior players.

“I think that’s why Mick was keen for me to join forces with him again,” Wiley said. “Perhaps he thinks I can be a good conduit between the playing group and the coach, and that’s an advantage, because once you create a positive environment where everyone comes to work happy, then the sky’s the limit.”

Unfortunately for all concerned, the Malthouse-Wiley combination wasn’t able to deliver the success that Carlton so desperately needed. The Blues finished 13th on the ladder in 2014, and were heading for an even worse result by late May 2015 when Malthouse was sacked. Although caretaker coach John Barker did all he could in the latter half of the season, the team was decimated by injury to key personnel and wound up with the wooden spoon.

In August 2015, former Hawthorn assistant coach Brendon Bolton was appointed as Carlton’s next senior coach. A few weeks later, Wiley’s two seasons at Princes Park came to an end when he told the Blues that he would not be seeking a renewal of his contract. He returned to his home state and the WAFL, where he was appointed senior coach of East Fremantle.