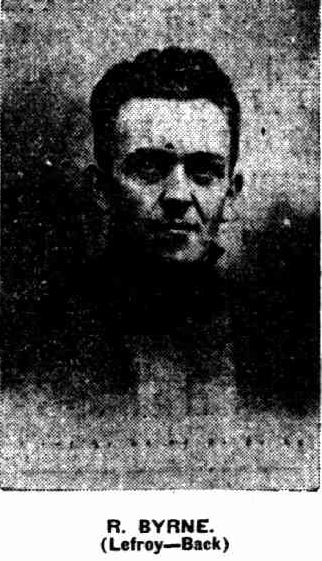 Two days after his eighteenth birthday in August 1918, Ronnie Byrne left his home in Hobart, Tasmania, and enlisted to fight for his country in World War 1. By then, the apprentice electrician and promising footballer had trained for four years with the Army Cadets, itching to do his bit for King and country.

However, in November of that year, an exhausted Germany agreed to an armistice, and the War to end all Wars finally ended. Byrne was discharged after only four months in uniform, and went back to the life of a ‘sparky’ during the week, and a clever centreman for his local football club, Lefroy on weekends.

In 1924, the powerful Two Blues of Lefroy won their seventh TFL Premiership, with Ronnie Byrne a driving force in the middle. That effort brought an approach from the Carlton Football Club, and early the following year, Byrne crossed Bass Strait to join the Navy Blues - just as Carlton started a monumental slide.

Byrne played his first senior game on a half-back flank in Carlton’s second match of the 1925 season. It was a horrifying day for all Blues’ supporters, as Essendon thrashed us by seven goals on our home ground. Club captain Maurie Beasy and playing coach Paddy O'Brien both resigned in the aftermath of that defeat, and from then on, the team never really recovered.

Under caretaker captain-coach Ray Brew, Carlton struggled for wins through the middle stages of the year. Byrne was used mainly at half-back or in a back pocket until midway through the season, when former South Melbourne star Jim Caldwell took over as senior coach of the Blues, and gave Byrne a chance to show what he could do in the centre. Ronnie proved to be more than handy in the pivot, and wrapped up his debut year with 11 games and three goals to his credit.

Although Carlton was happy to retain Caldwell as coach for 1926, Jim was less enthusiastic. Instead, he accepted a generous offer to take over the reins at country club Rutherglen - leaving Carlton to once again appoint Ray Brew as playing coach – in a decision that brought a premature end to Ronnie Byrne’s career.

From a later perspective, it appears that Brew saw Byrne as a defender, while Ronnie preferred the freedom of playing in the centre. Brew stood firm, and Byrne played just three more games for Carlton before quitting his VFL career after the Blues’ loss to Fitzroy at the Brunswick Street Oval in round 5, 1926.

Although he was only 25 when he wore the Old Dark Navy Blue for the last time, Byrne’s exploits on the field after that are a mystery. In 1927 he was granted a permit to St Kilda from Carlton. He could well have returned to Tasmania and Lefroy – and if he did, he may have played in another Premiership in 1930. But we will probably never know for certain, because Lefroy – winner of nine TFL flags and two Tasmanian State Championships in its proud 49-year history - folded after World War II.