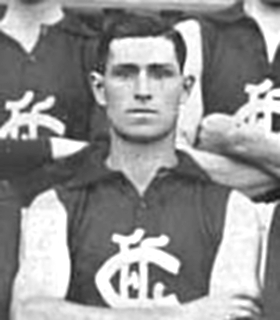 One of only two Carlton players to have made their senior debut in a VFL or AFL final (the other being Scott Howell, sixty years later) Maurie Beasy was at first a reluctant recruit for the Blues. Although at the time he was considered a ready-made senior footballer by more than one VFL club, he wouldn’t leave his home town of Dunolly in central Victoria to play in Melbourne. It was only when two former opponents; Horrie Clover and Bert Boromeo (both of whom had lowered their colours to Beasy in country football) eventually convinced him to join them at Princes Park, that Beasy emerged as one of Carlton’s stars of his era.

Having been VFL finalists in 1919, the Blues approached season 1920 with optimism, especially because the club continued to be strengthened by the return of personnel from service in World War 1. Follower Boromeo, and key forward Clover were two of Carlton’s real finds in the first half of the year, although the team was languishing in a disappointing seventh place on the ladder after nine rounds. About then, Clover, Boromeo and coach Norman Clark tried again to lure the classy, long–kicking, defender from Dunolly into Navy Blue. This time they succeeded, but there was a catch.

Beasy agreed to play for Carlton, but not to live in the city. He would train as usual with his home club, and travel by rail to Melbourne each Friday morning. After playing on Saturday, he would go back on the train to Dunolly on Monday morning. It wasn’t an ideal arrangement, however Clark – ever the disciplinarian – somehow agreed. No doubt his concerns were eased when Carlton won seven of their last eight matches, because Clark caused a minor sensation by selecting Beasy to debut at half-back in the 1920 first Semi Final against Richmond at the MCG.

Wearing guernsey number 11, 24 year-old Beasy ran down the race and onto the hallowed turf at Jolimont to the roar of more than 62,000 spectators on that overcast Saturday afternoon, and quickly proved that the high opinions of his ability were certainly not misplaced. The Blues whipped Richmond by four goals in a typically torrid clash on a heavy track, with the Carlton half-back line of Beasy, Paddy O'Brien and Jack Greenhill reigning supreme. All three were listed among the Blues’ best players.

Next up, Carlton met Collingwood in the Preliminary Final, and Beasy’s second taste of VFL finals football ended in a four-goal defeat. On a still-boggy MCG – made much worse by week-long rain - Collingwood’s small brigade ran riot, and Carlton couldn’t match them.

In rounds four (against Fitzroy) and five (against South Melbourne) of 1921, Carlton played consecutive drawn matches for only the second time in the club’s history. Round five also brought a cruel and lengthy halt to Beasy’s career, when he suffered a broken leg that ruled him out for the rest of the year. That injury took a long time to heal, and he managed just five more games in the best part of two seasons.

By 1923 however, Maurie was back his best. He renewed his interrupted association with Paddy O'Brien across half-back, and his form was so good in a struggling Carlton team that he was selected in the Victorian squad for that year’s ANFC Carnival. He was a standout performer in three matches for the Vics, and held his place in the state side again in 1924.

In 1925, he was appointed captain of Carlton, but resigned after the Blues suffered heavy defeats in the opening two rounds. He was still living in Dunolly and travelling to games each weekend, and even the responsibility of the captaincy couldn’t convince him to relocate.

With the captaincy, Beasy had also accepted the challenge of leading the Blues’ ruck division. Although only 185 cm tall and 87 kg, Maurie brought finesse to the followers’ role, and was something of a revelation when he reversed the traditional first ruckman’s role by dropping back into defence for a rest, rather than pushing forward.

Beasy played finals football for the third and last time in the 1927 first Semi Final, against the old foe Richmond. It was another tough - at times spiteful - clash between fierce rivals, and the scores were level with only a minute to play, before Richmond got the break they needed, and kicked a late goal to seal a hard-fought win. Carlton’s three best were Beasy, rover Tommy Downs and key defender Alex Duncan, who were all valiant in defeat.

Maurie played on into the next season, but by mid-year had decided that his time was up. He laced up his boots for the last time as a Blue in June 1928, when Carlton lost a round 9 thriller by one point to a superior, yet dreadfully inaccurate Footscray at Princes Park.

Maurie went back to his stonemason’s job at Dunolly after that, and two years later, celebrated the birth of a son, Douglas Edward Beasy. In 1956, that same Doug Beasy added to his family’s impressive football credentials when he won Carlton’s Best and Fairest award on the way to 129 distinguished games for the Old Dark Navy Blues.

In 2012 the Beasy football genes are still represented at elite level, in the person of Hawthorn's Brendan Whitecross. The grand nephew of Doug, and the great-grandson of Maurie Beasy, Whitecross is a 183 cm midfielder-forward, recruited by the Hawks at number 29 in the 2007 National Draft.

The Argus published an article on Maryborough on April 12 1930. In part it said;
"Then a little to the north, in a town called Dunolly, came a rare footballer by the name of Maurie Beasy. While his build would not suggest undue strength, as he was light of loin and limb, considering his height he possessed that quality in a marked degree, though his strong suit was pace. He performed many valorous deeds in the ruck for Carlton, being one of the best players of his day. He was not an all round performer, but a great follower."