The Blues would go down to Fitzroy by 6 points in this season-opener at Princes Park. Notable for the debuts of Scott Spalding and Andrew McKay, one to become a Captain of the Club and 200 game player, and the other to play his solitary and only game on this very day, this game was a high-scoring entry to what would become a Grand Final year for the Blues.

Greg Williams would pick up 32 possessions and 3 Brownlow votes for his game, whilst Rohan Welsh - at this stage a great young hope as a forward and pinch hitting ruckman, would kick 4 and poll the 1 vote.

In this game the core of our 1995 Premiership team would be present, with Silvagni, Sexton, Hanna, McKay, Brown, Williams, Dean, Spalding, Kernahan, Bradley and Koutoufides all taking the field. 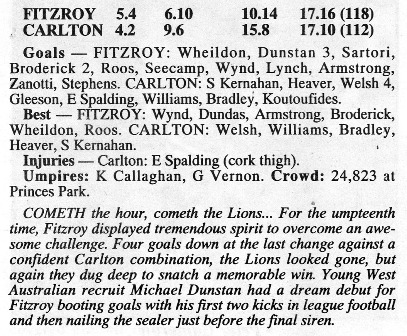