The Duke (of Earl) 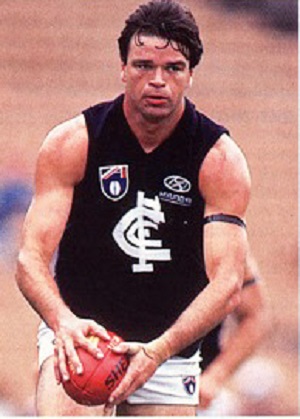 Blues supporters of the 1990’s loved this big West Australian key position player, even as they covered their eyes and crossed their fingers whenever he lined up a shot on goal. Although he was surely one of the most ungainly kicks to have ever played AFL football, Earl “Duke” Spalding was a consummate team player - brave, unselfish and a strong pack mark. During a notable 211-game career at Melbourne and Carlton, he figured in three Grand Finals, and collected a richly-deserved Premiership medal with the Blues in 1995.

Nicknamed “Duke” after the catchy 1960’s pop song; “Duke of Earl”, Spalding first made the back pages of the daily newspapers in his home town of Perth in the summer of 1984-85, when he was selected in the WA cricket team for that season’s Sheffield Shield competition. A tearaway fast bowler, Spalding played four matches for his state, before deciding that Australian football was his preferred sport.

After two particularly impressive seasons as a ruckman-forward with Perth in the WAFL, Earl was recruited by Melbourne in 1987. He went on to play 109 games over five seasons for the Demons - including their loss to Hawthorn in the 1988 Grand Final – and represented his home state on six occasions. Yet he never really became an automatic selection in Melbourne's senior side. By 1991 he was intent on a change of clubs, and Carlton snapped him up with our number five selection in that year’s national draft.

At Princes Park, The Duke struck an immediate rapport with senior coach David Parkin, who began building a forward structure based around the 198 cm Spalding and team captain Stephen Kernahan in the key attacking posts. It all seemed to be coming together nicely, too, when Carlton cruised into the 1993 Grand Final against Essendon – but the younger, fresher and more committed Bombers simply blew the Blues away.

Having been found wanting, Carlton went searching for pace in 1994, and found it in the likes of Adrian Whitehead and Troy Bond. However, it was the recruitment of ex-Brisbane Bear Brad Pearce – a quick-leading, dangerous goal-sneak – that rounded out Parkin’s plan, and turned the spotlight squarely on Earl Spalding. In the Duke, Parkin had fashioned a centre half-forward who busted a gut for his team week after week. If he didn’t mark the ball cleanly himself, then he generally brought it to ground, where his second and third efforts to tackle, chase and shepherd in support of his team-mates were invaluable.

Perhaps the passage of play that typified Spalding’s approach came early in the second quarter of the '95 Grand Final between Carlton and Geelong. The Blues led by 13 points at the first change, knowing full well that the Cats were setting themselves to come back hard. A few minutes into the second term, Geelong’s Peter Riccardi gathered the ball deep in defence for his team, burst into space, and steadied before kicking toward his intended target. Just then, Spalding came from nowhere. Showing amazing agility, he smothered the ball off Riccardi’s boot, picked it up, ran on, and slammed through a great goal from close in. Carlton’s confidence soared, and from then on we were never going to be beaten. The roar from the stands that greeted the Duke when he was presented with his Premiership medal seemed to genuinely move the big bloke, and was testament to just how completely the Carlton faithful had embraced the former Demon.

In his later years at Princes Park, Earl worked hard at correcting his kicking style, and it may surprise some readers to learn that by the end of his career at Carlton, he had balanced his over all goal-kicking ledger at 169 goals, 163 behinds. He wore guernsey number 11 throughout his time at Princes Park, and retired after Carlton beat Collingwood in the Match of the Day at the MCG in round 19, 1997. 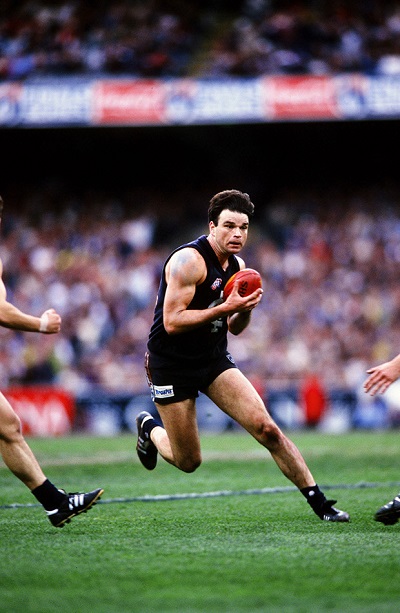 Among Earl’s many fond memories of his six seasons in navy blue, one would surely be the day that he and his brother Scott played together at Carlton for the first and only time. The occasion was round 1, 1993, when Fitzroy beat the Blues by 6 points in an upset, but Carlton gained most from the game because of the debut of future captain Andrew McKay.

Although he was 32 years old when his AFL career came to an end, Spalding returned to WA in 1998 to be re-united with Scott at East Fremantle, and the brothers shared the joy of a Premiership together at last when the Sharks beat West Perth comfortably in that year's WAFL Grand Final.

Earl eventually hung up his boots for good in 1999, to take on the role of assistant coach with East Fremantle (coached by ex-Blue Wayne Blackwell). Two years later, he was appointed senior coach of the Sharks, but spent just one season in the job before returning to the AFL as an assistant coach with the Fremantle Dockers.

In 2012, “The Duke” coached Perth-based amateur club Wesley-Curtin to its first-ever senior Premiership. That flag, won in B-Grade, saw the Tigers promoted, and 12 months later Spalding added another highlight to his outstanding resume by steering his team to a 32-point victory over University in the 2013 WAAFL A-Grade Grand Final.

In 2015, Earl's coaching journey completed a full circle when he was appointed senior coach at his original WAFL club, Perth.

Articles: That First Pick...Players taken with Carlton's first pick in the draft | The Longest Roads to Glory!