Carlton returned to form and thumped Fitzroy by 36 points at VFL Park, with Big Nick, Jezza and Southby all on state duty.

Keith McKenzie coached Carlton in this match, with John Nicholls, Alex Jesaulenko and Geoff Southby all on state duties for Victoria. All up, the Blues were forced to make five changes, but this seemed to energise the team, and they snapped back to something like their best to thump Fitzroy by six goals on the wide expanses at Waverley.
In other important matches, Collingwood vanquished Richmond at Victoria Park, allowing Carlton to displace the Tigers from the top of the ladder, while Melbourne beat Hawthorn by one solitary point at the MCG to topple the Hawks out of the top five.

Fitzroy proved a huge disappointment to both club officials and supporters when they were completely 'taken apart' by a patched-up Carlton. With more desire for a win, the Blues registered their second win in a row over the Lions, who kicked their lowest score against Carlton for nine matches. The Lions can almost certainly say goodbye to their early season hopes of making the 1972 Finals, although they will still cause many upsets before the season is finished. - Football Record.

Carlton ended Fitzroy's season at VFL Park on the weekend. The professional Carlton players completely outclassed a bewildered, baffled bunch of Fitzroy players to score an effortless 36-point win. Fitzroy played without cohesion and looked a pack of second-raters against the precise, persistent Carlton. It is impossible to detract from Carlton's display. With David McKay and Peter Jones dominating the rucks, Trevor Keogh and Andy Lukas working most effectively as ruck-rovers, and Adrian Gallagher and Garry Crane roving well, Carlton had persistent thrust. Even though key forwards Robert Walls and Greg Kennedy were patchy, Carlton had sufficient attacking chances to overcome this. The Carlton defenders particularily Bruce Doull, Paul Hurst and Vin Waite held firmly against Fitzroy's spasmodic bunch of forwards. - Graeme Kelly; The Australian.

I am very thrilled for Big Nick. The way the players responded was tremendous. I have never seen such keenness and enthusiasm before a game and I knew we had it won before the players ran out on the ground. It is a real thrill to coach a winning team, and certainly so when the team is such a bunch of professionals as Carlton. - Keith McKenzie; Carlton's Assistant Coach. 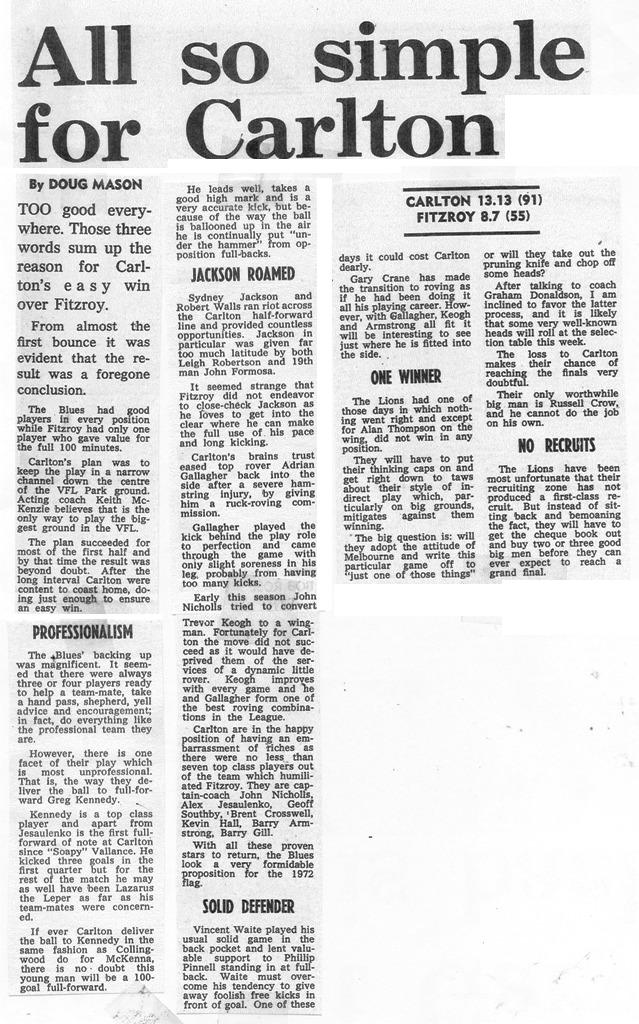 1986 - Doull makes the football do the talking.