Full-back of the Seventies... 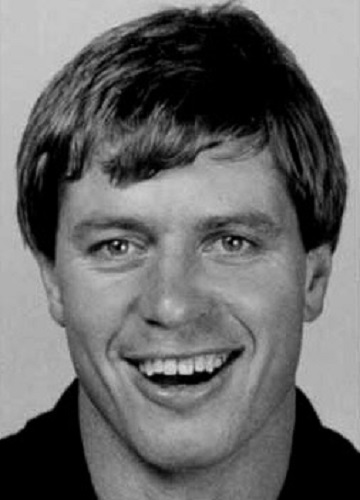 Throughout the last few decades of the 20th century, the Carlton Football Club was represented by two of the very best full-backs ever to have played the game in Geoff Southby and Stephen Silvagni. In an honour richly deserved, Silvagni was named as the AFL's Fullback of the Century in 2000 – but then and now, there are legions of Blues' supporters of a more mature vintage willing to argue that Southby could just as easily have been given the nod. That's how good this rangy, mop-haired, consummate defender was.

Earmarked as a potential star from an early age, Geoffrey Robert Southby grew up in Bendigo and played junior football with Sandhurst. During his mid-teens, he gave football away briefly to concentrate on his other favourite sport of baseball, only to be talked into lacing his boots on again while studying in Melbourne. He joined Power House in the VAFA and won their Best and Fairest in 1969, then returned to Bendigo to be Sandhurst’s club champion in 1970. Collingwood made approaches to him after that, but the VFL zoning rules in place at that time meant that he could only play with the Blues, who welcomed him to Princes Park with wide open arms.

Having won Premierships in two of the previous three seasons, the Blues were the powerhouse of the League in 1970 and hungry for more success. The club had a stable, focussed committee, outstanding leadership and a player roster packed with talent – although the retirement of incumbent full-back Wes Lofts at the end of that season caused some concerns. High hopes were held that 20 year-old Southby could develop into an adequate successor to Lofts, but few anticipated the spectacular impact he had on the team from day one. At 188 cm and 87 kg he was the perfect build for a key defender of that era, and from his first practice match he showed he was right at home on the last line of defence, and a worthy inheritor of Lofts’ number 20 guernsey.

Geoff’s pre-season form demanded his early inclusion in the senior team, and it came as no surprise when he bypassed the Reserves competition to play his first match in navy blue against North Melbourne at Arden St. in round 1, 1971. Lining up at full-back alongside Barry Gill and Vin Waite, Southby underwent a torrid baptism of fire when he picked up the Shinboners’ mercurial match-winner Sam Kekovich, who kicked four goals as North won by 26 points. Geoff learned fast however, and within a matter of weeks he was averaging 15 possessions and five marks per game. Carlton finished the home and away season in fifth place on the ladder and failed to qualify for the finals, but a star had been uncovered when Southby enjoyed the most impressive debut season by a Blue since Alex Jesaulenko in 1967. On the way to playing 21 of a possible 22 games, Geoff was selected to represent Victoria before the mid-point of the season – an honour that was to continue for five consecutive years, and eventually stretch to 16 interstate matches. In September, Southby finished his stellar debut season as Carlton’s Best First Year Player, as well as the Blues’ 1971 Best and Fairest. By any measure, that was an extraordinary achievement, especially given that he had established himself in the reigning premiership team after only a handful of games, and was not yet 21.

But if Geoff’s first season was spectacularly successful, his second was even better. In 1972, the Blues roared back to the top of the ladder, before grafting their way through a gruelling final series to upset Richmond in a record-breaking Grand Final. Adopting a game plan of all-out attack in the decider, Carlton overwhelmed the Tigers to kick 28 goals in four quarters of relentless football, with the Blues’ last line of John O’Connell, Southby and David McKay rock-solid all day. And making that triumph even sweeter, Geoff was voted Carlton’s Best and Fairest for the second year running.

By 1973, Southby was firmly established among the elite of the competition. Beautifully balanced, and with cat-like reflexes, he was a great high mark and a gloriously long kick with his trademark torpedo punt – either on run or when returning the ball into play. His defensive instincts and coolness under pressure were first rate, and he always seemed to have that second longer to dispose of the ball - as all champions do. Most of the time he played in front, and loved to set up Carlton attacks by dashing forward and finding a team-mate with a soaring “torp.” Such was his influence, that at times some opposing teams actually sent a defender to full-forward in an attempt to nullify him! 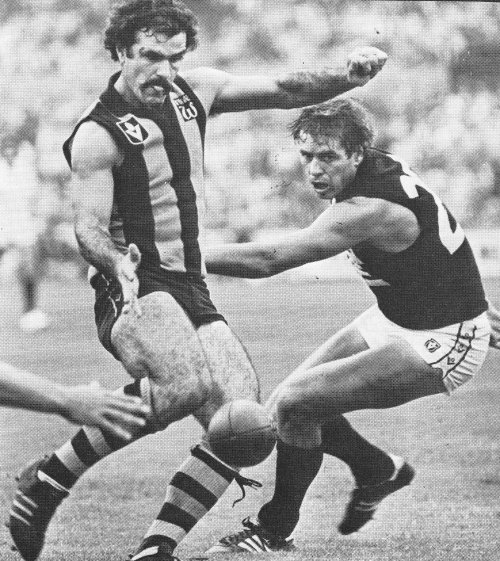 Following their shock defeat in '72, Richmond were burning for revenge when they met Carlton again in the 1973 Grand Final, and the Tigers went head-hunting. In the first minutes of the match in front of a seething crowd of 116,000, Carlton captain John Nicholls was hit with a sledge-hammer shirt-front from Tiger Laurie Fowler, concussed, and all but put out of the game. Then early in the second term, Southby’s opponent Neil Balme took his eyes off the ball and hit Geoff with a vicious round arm to the face that concussed him so badly that he too, was a passenger for the rest of the day. In fact, it was later found that Southby’s jaw was broken, and it was well into the next season before he fully recovered. Richmond won the flag that day, but lost all respect.

By 1975, Geoff was back to his brilliant best, and played his 100th game on a miserably wet and cold Saturday afternoon against North Melbourne at Waverley in round 15. Carlton were on a 10-match winning streak beforehand, but fell in a hole against the Kangas and were well beaten. The Blues played on into September again in 1975 and ’76 - without progressing past the Preliminary Final – before Southby’s name was splashed across the newspapers when he fell into dispute with the club and requested a transfer to South Melbourne.

By then, Geoff was still just 27, and at his peak. Carlton flatly refused to clear him of course, and the impasse dragged on for many weeks. It later transpired that Southby had been feeling stale at full-back for some time. Early in 1976, he had asked to be played in attack and had kicked 23 goals in 10 games – but when the choice had to be made between Southby the handy forward and Southby the champion full-back, there was only one answer. Eventually, Geoff relented and returned to the fold for the second half of the 1977 season in time to be embroiled in the events that led to the appointment of Alex Jesaulenko as captain-coach of the Blues in 1978. When “Jezza’ led the resurgent Blues into the 1979 Grand Final against Collingwood, and Wayne Harmes' desperate dive and swipe at the ball in the dying minutes saw Ken Sheldon kick the sealer, Southby collected his second Premiership medal and thanked his lucky stars that he had had decided to stay with the Blues.

In 1980, ructions at committee level prior to the first game of the season led to the messy departures of Jesaulenko and President George Harris. Former Premiership ruckman Peter Jones was appointed coach, and for a while the Blues looked likely flag contenders. Southby registered his 200th game when Carlton lost to North Melbourne at Princes Park in round 17, before straight-set losses to Richmond in the Qualifying Final and Collingwood in a Semi Final ended Carlton’s hopes of back-to-back flags. Those defeats also triggered the sacking of Jones in favour of David Parkin.

Spurred by the failure of that wasted season, and aided by some astute recruiting, Carlton returned to the top rungs of the competition in 1981 and '82, sweeping to back-to-back flags – victories that were even more meritorious because Southby was missing from both Grand Finals because of injury. After a charmed run of trouble-free seasons, Geoff began to suffer hamstring-related back pain in 1981, and when the problem flared up during Carlton’s Semi Final win against Geelong, his season ended early. It was a similar story in ’82 – after a consistent home and away season, he broke down at training during the finals and couldn’t play in Carlton’s courageous Grand Final victory over Richmond.

At Waverley in round 16, 1983, Geoff celebrated his 250th game with an emphatic win over Fitzroy, before playing in the last final of his illustrious career at the same ground in September, when Essendon beat the Blues in a one-sided Elimination Final. In August of the following year, aged 33, he announced his retirement, and Carlton sent him off with a hard-fought win over North Melbourne at Princes Park. By then, only six other Blues had played more games for the club, and none were more admired or respected.

Although he had hung up his boots, Geoff wasn’t immediately lost to the Blues. He coached the clubs’ Under -19 team in 1985-86 before accepting an invitation from Fitzroy to join their match committee and provide specialist coaching.. He spent three seasons with the Lions, then moved on to be a forward scout for both Adelaide and Geelong.

In May 2000, Carlton published their Team of the Century, overcoming the difficulty of deciding between Silvagni and Southby as full-back by naming Geoff in a back pocket. Later, Southby missed out on also being included when Silvagni was announced as the AFL Full-back of the Century, but not in the hearts and minds of the Carlton faithful.

By March 2013, Southby had been a member of the Carlton Hall of Fame for 18 years when he was elevated to Legend status – only the twelfth player in Carlton's illustrious history to be given that honour.

In a remarkable series of coincidences, Geoff played his first, his last, his 100th and his 200th matches all against North Melbourne. 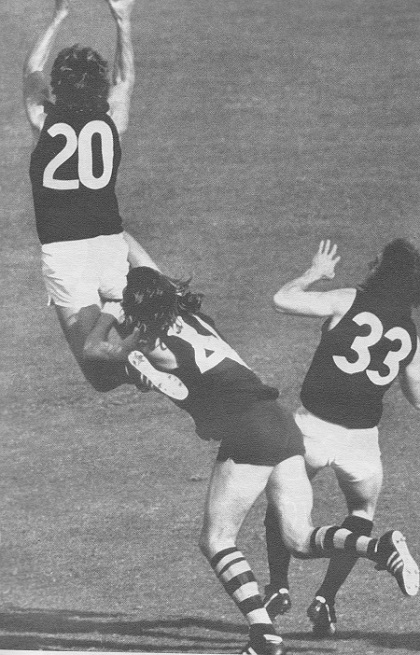