Carlton downed Richmond by 56 points at Princes Park. Yet another big win

The Blues bounced back from a controversial loss to Geelong to hammer Richmond by almost ten goals at Princes Park. Our potent forward line overwhelmed the Tigers, with first year player Alex Marcou in outstanding form. 'Marcel' kicked five goals in a best on ground performance.

After yet another big win, Carlton was rock solid on top of the ladder, with a four point break over Fitzroy, Essendon, North Melbourne and Collingwood.

League leaders Carlton bounced back from the previous weeks defeat by Geelong to crush Richmond by 56 points at Princes Park. The Blues dominated from the outset, kicking 5.3 against the wind and added a further 16.9 for the match with speedy rover Alex Marcou booting five goals and creating many others. - Football Record.

''Statistically Speaking
Carlton again held top position on the League ladder when they had a 56 point win over the Tigers. Alex Marcou with 25 disposals and 5 goals was Carlton's best player with ex Hawthorn player Barry Rowlings best for the Tigers with 36 disposals. Richmond had nearly 8% more kicks and 6% more marks, but Carlton had just on 10% more handball. - Ray Young Football Record.'' 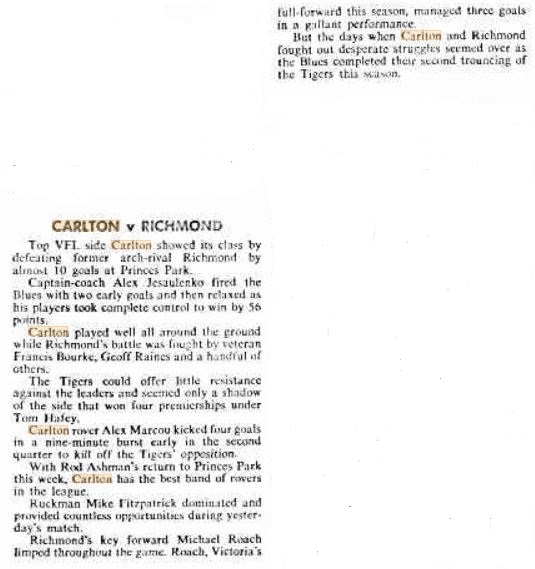