Carlton stunned the ladder leading (and eventual Premier) Melbourne with this 37 point win at the MCG. Despite a relatively close game at the last change, Carlton kicked 7 goals to put the game beyond any doubt.

We were in 7th spot with 3 rounds to go - still 2 games off the 3rd placed team. 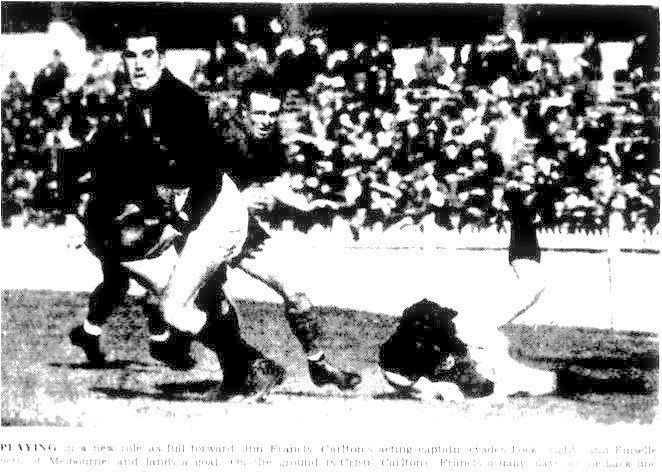 Jim Francis goals while Mickey Crisp is lying on the ground

Ron Barassi (senior) was one of Melbourne's better players in this match. This would be his final game against Carlton.
His last VFL game was in this year's Melbourne premiership team, where he was the 19th man.
Ron would be killed in action at Tobruk North Africa, next year on July 31.
His son Ron (jnr) would become the best player in the VFL who was an inspirational Melbourne captain.
Ron (jnr) would be lured to Carlton in 1965 to be appointed as captain-coach, and coach the Blues to flags in 1968 and 1970
Round 14 | Round 16