Carlton held off North Melbourne in a high-scoring shootout at Docklands, and won by a point.

In another extraordinary game of football involving Carlton and North Melbourne, the Blues withstood a withering finish from the Shinboners to win by a solitary point in front of a packed house at Docklands. Carlton led by 35 points late in the third term, before North unleashed an onslaught and kicked six goals to two in the final quarter. Even so, that wasn’t enough. North fell agonisingly short, and the Blues evened up their season at 8 wins and 8 losses after 16 games.

The previous week, Carlton had emerged from a late-season slump to beat St Kilda, and at last seemed to be gaining in confidence. Therefore, the team that burst through the banner on this cool Friday night was unchanged, apart from the role of substitute. Jaryd Cachia wore the green vest this time, allowing Eddie Betts to take up his customary role in a forward pocket.

Barely two minutes into the match, Betts swooped on the ball at half-forward, and chipped a clever pass to Lachie Henderson. Carlton’s new swingman goaled with his kick, and from then on the crowd was treated to a fast, open quarter of shoot-out football that produced another 10 goals. With Carlton’s regular nemesis Lindsay Thomas looking dangerous, and the Blues’ mosquito fleet of Betts, Chris Yarran and Jeff Garlett flashing into play, Carlton led by one point at the first break, despite having four less scoring shots.

Eleven minutes into the second quarter, North hit the front when their second major of the term sailed through. Garlett promptly replied with a brilliant set shot from deep in the left forward pocket, then McLean, Rowe and Henderson linked up for Carlton’s ninth. At half-time the margin was still only 6 points in the Blues’ favour, although North were still creating more chances and by rights should have been a goal or two ahead.

Whatever Carlton coach Mick Malthouse said to his charges in the rooms during the long break should be bottled, because the Blues came out firing and hit their straps in the third quarter. Led by Matthew Kreuzer in the ruck, Judd, Curnow and Murphy in the middle and Garlett across half-forward, they swept North aside for most of the term, and added 5.4 to 3.3 to set up a 21-point advantage at three-quarter time.

Carlton fans were rightly confident as the last term began, and they jumped with joy when Zach Tuohy streamed through the centre square and bombed one of the goals of the round from outside the 50-metre arc in the first two minutes of play. But it didn’t take long for the alarm bells to start ringing when North’s Drew Petrie – who had been rarely sighted until that moment – was instrumental in three North Melbourne goals in succession between the 5-minute and 9-minute marks of the term. Chris Yarran stemmed the tide with his second major approaching the mid-point of the quarter, but North had found their second wind and were throwing everything they had left into the contest.

A brilliant, long solo goal by Daniel Wells for North, followed by a behind to Ziebel cut the margin to 13 points after 18 minutes, and when Thomas roosted his sixth goal of the match almost immediately afterwards, the butterflies in the stomachs of the Carlton faithful were bellowing like steam engines. The Blues were still in front, but the Shinboners had all the momentum.

In a frantic last five minutes, Garlett hit the post with a long shot from the arc, before Dennis Armfield sprayed a sitter from 25 metres. And when Petrie took another big grab and kicked his third major of the term, North had closed to within one kick. Matthew Kruezer could have sealed it for Carlton with a set shot from deep in the right forward pocket - but missed - then the ball eluded North’s Brent Harvey and bounced through for a point with seconds remaining to give the Blues a spine-tingling victory by the smallest possible margin.

In losing this game, North Melbourne suffered their fifth defeat of the year by less than a goal. Remarkably, they were superior to the Blues in most key statistics and had 54 more possessions. But Carlton were more efficient with their ball use and better in the one-on-one contests.

Interesting Fact: This was the 150th meeting between these two sides since North Melbourne joined the VFL/AFL in 1925. At this point, Carlton had won 96 of those matches, at a winning ratio of 64%. 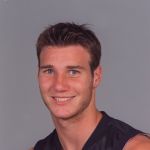