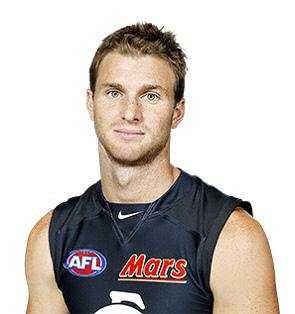 Lachlan “Lachie” Henderson made sports headlines in December, 2009, when he was a central figure in the transfer of Brendan Fevola from Carlton to the Brisbane Lions. In one of the biggest football stories of the year, the Navy Blues parted with Fevola – a prolific, wayward, Coleman Medal-winning full forward – plus National Draft pick 27, in exchange for Henderson and selection 12.

Once that deal had been done and the relative draft selections made, Fevola and Geelong Falcons midfielder Callum Bartlett became Lions recruits. In return, Carlton picked up Henderson (a former top 10 draftee) as well as promising West Australian midfielder Kane Lucas. A few short months later however, Brisbane’s decision to recruit Fevola became a massive blunder. He was sacked after just 17 matches for his new team, and Carlton emerged from the situation as a very big winner.

Two years beforehand, Henderson had been drafted by Brisbane at selection 8 in the 2007 AFL National Draft. The Lions rated the well-built 196 cm youngster very highly, and took him in preference to the likes of Ben McEvoy, Patrick Dangerfield and Cyril Rioli. Determined to play AFL football from an early age, Henderson had graduated from the AIS-AFL Academy that same year, having completed his schooling at Geelong College and having played TAC Cup Under-18 football for the Geelong Falcons. The son of Ian (a country veterinarian) and Vonnie (a former ballet dancer) Lachie hailed from Birregurra, a small township near Colac in western Victoria.

Making his League debut for Brisbane as an 18 year-old in a thrilling 2-point victory over Collingwood at the Gabba in round 2, 2008, Henderson progressed quickly. By 2009 he was regarded as the likely heir apparent to the Lions’ outstanding centre half-forward and captain Jonathan Brown – at least until his name was splashed across the sports pages as a rumoured trade for Fevola.

Knowing that his prospects of a regular senior place at Brisbane would be even further out of reach with Fevola in the team, Henderson quickly embraced the idea of a return to his home state and negotiations were swift. Before Christmas, Lachie was training in the summer heat at Princes Park, and looking forward to establishing a new career at one of the game’s oldest and most successful clubs. 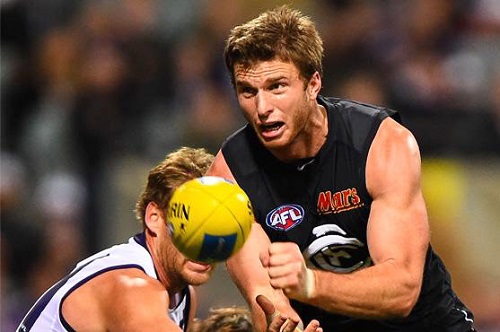 Henderson made his first appearance in Carlton colours in the club’s first 2010 pre-season NAB Cup game against the Sydney Swans at the brand-new Blacktown Oval in Sydney’s west. Wearing guernsey number 23 – made famous by the likes of Bert Deacon and Paul Meldrum - his form was excellent throughout the series, and it was no surprise when he was one of three new faces named in Carlton’s line-up for the first round clash against Richmond on a balmy Thursday evening at the MCG in late March.

Lachie kicked the second goal of the game that night, to open his account and set the Blues on their way to an emphatic 56-point victory. He followed up with another eye-catching effort and three majors in Carlton’s second-round game against his former team Brisbane, and by the end of the home and away season his 18 matches had produced 23 goals. The Navy Blues finished eighth, and qualified for the finals for a second successive year.

Facing a sudden death Elimination Final against the Sydney Swans at Homebush Stadium, the Blues selected Henderson at full-forward for his first AFL final, and the big bloke worked hard to offer a target for his midfield runners. Presenting tirelessly, he ended the game with two goals, and almost pulled the game out of the fire in the last minute when he marked on the 50-metre arc and dished off a handpass to Jeffery Garlett streaming past. Jeff would normally have nailed the shot, but this one just missed, and Carlton lost by 5 points.

During the 2011 pre-season, Henderson suffered a hip injury that sidelined him from scheduled training for eight weeks. This meant that he was underdone when the season proper began, so he spent most of the first half of the year at VFL level with the Northern Bullants. Back to near his best at last for round 12, he was up and about at centre half-forward as the Blueboys demolished Brisbane by 61 points at Docklands Stadium – but it was his role in Carlton’s huge win over Richmond three weeks later at the MCG that caught the attention of even the most casual spectator. In the absence of injured full-back Michael Jamison, Henderson was asked to play on the Tigers’ star forward Jack Riewoldt (the reigning AFL Coleman Medallist) that afternoon, and was a revelation. Although “Jumpin’ Jack” finished the game with four goals, Henderson matched him all day - wearing him tightly on the lead, and never for a moment allowing the Tiger spearhead any space or time.

From then on, and throughout the latter part of 2011, ‘Hendo’ looked very comfortable in the key defensive role. Although Jamison returned on the eve of the finals, Henderson was still assigned to the opposition’s most dangerous forward and stood up in both of the Blues’ memorable finals matches – a big Elimination Final win over Essendon, followed by a harrowing 3-point Semi Final defeat by the Eagles.

When season 2012 got underway, Lachie played solidly throughout the first eight games until he was a late withdrawal from Carlton’s round 9 meeting with Melbourne at the MCG. A serious groin strain had begun to trouble him, and despite the best efforts of the club’s medical staff over the following weeks, it didn’t respond to treatment. At the same time, a raft of injuries to key players triggered a mid-season form slump for the Blues, and put the team’s finals aspirations in serious doubt. By round 16 (when Carlton was soundly thrashed by North Melbourne) Henderson had managed only three matches in eight weeks. The likelihood of a finals berth for the Blues was rapidly diminishing, so the decision was made that Lachie would undergo immediate surgery, with the aim of giving him the best possible opportunity to begin 2013 trouble-free.

That proved to be the right move by the Blues, because Henderson began 2013 in excellent shape, and went on to have a stellar individual year. Under a new senior coach - former West Coast and Collingwood Premiership mentor Mick Malthouse, Lachie and Carlton endured a rollercoaster season, eventually losing to Sydney in a dour Semi Final. In the process, Lachie emerged as one of the Blues real weapons – a genuine big match performer who was equally effective in attack and defence. 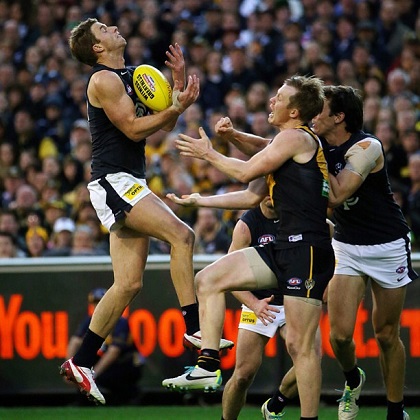 One of five Blues to play in all of Carlton’s 24 matches for the year, ‘Hendo’ kicked 26 goals and was probably responsible for saving just as many more. He was the club’s top aerialist with 6.4 marks per game (taking 153 overall) as well as ranking third in the competition for contested grabs. Highlights of his season included both matches against St Kilda (when he averaged 16 disposals, 11 marks and 3.5 goals per game) and the Semi Final defeat by Sydney (22 disposals and 9 marks, mostly in defence). In October, Lachie starred once more at Carlton’s end of season dinner, finishing third behind Kade Simpson and Andrew Walker in voting for the John Nicholls Medal, and taking home the club’s Most Determined and High Achiever awards.

The Navy Blues began 2014 with an optimism that was soon blunted by successive losses in the first four games. Things didn’t improve much after that, and the team eventually finished among the also-rans in 13th place on the ladder. Henderson started the year in defence, before the emergence of Sam Rowe as a tall defender allowed Lachie to play as Carlton’s key forward. His two most productive games came in round 5 against the Western Bulldogs (when he took 8 marks and kicked 5 goals) and round 18 against North Melbourne (when he was super efficient, with a career-best 6 majors from 17 disposals and 7 marks). However, just one week later, a head clash during the Blues’ heart-breaking loss to Fremantle ended Hendo’s season early, when he was diagnosed with a fractured eye socket.

For every Bluebagger unfortunate enough to experience it, season 2015 will surely be remembered as Carlton’s Season from Hell. Beginning the year with three heavy defeats, Carlton was brutally exposed by a long list of injuries and slid further toward oblivion week by week. In May - after champion Chris Judd was forced into retirement by a season-ending knee injury – coach Malthouse was sacked, and the riddled wreck of Carlton’s team sank toward the bottom of the ladder.

By late August, Henderson was one of a number of senior Carlton players under mounting pressure from the media and the clubs’ supporter base. Lachie had been asked to play forward for most the season to that point, and had averaged a goal a game in his 16 matches. But his impact had been minimal – especially in the devastating loss to fellow strugglers Brisbane in round 20. A day or so after that defeat, Henderson added more gloom to the atmosphere around Princes Park when his manager approached the club and requested that he be traded to another club at the end of the season. In a surprise reaction, Carlton’s Match Committee immediately suspended Henderson for the last three matches of the year.

“We are obviously disappointed with Lachie's decision to request a trade,” said Carlton Football Manager Andrew McKay, “but we want people who yearn to play for our Carlton jumper, and who will accept the responsibility that comes with it. In consultation with our playing leadership group, it was decided it's in the best interests of the club that Lachie sits out of the remaining three games this season.” Shortly afterwards, during the first few days of Trade Week, Henderson earned a niche in the history of AFL football when he was cleared to Geelong for the Cats’ first selection in the 2016 National Draft – becoming the first player ever to be traded for a future pick.

Henderson would play the next four seasons with Geelong from 2016 to 2019, in that time he would play 54 games and boot nine goals before being delisted by the Cats at the end of the 2019 season. Overall spanning three AFL clubs Henderson would play 171 games and kick 113 goals during his AFL career. He was later redrafted and continued playing with the Cats for the next few seasons.