Carlton were heavily criticised after beating Melbourne by 11 points at the MCG.

Perhaps because they were already assured of a top-two finish to the home and away season, the Blues eased off in the final quarter against Melbourne at the MCG, and escaped with an 11-point win.

Meanwhile, Richmond easily beat North Melbourne to stay within two points of the Blues, and remain our only threat for the minor premiership. Collingwood, Hawthorn and St Kilda made up the top five.

The Blues were unimpressive in recording their 14th win of the season over Melbourne, when they kicked 11.11 - their lowest MCG score against the Demons since 1964. Melbourne finished strongly to score 5.8 to 2.0 in the last quarter, but ran out of time to stop the Blues making their third win in a row over the Demons. - Football Record.

Carlton need to focus
At the moment, the Blues have a few problems. These became evident on Saturday when Melbourne was able to slam on 5.8 (38) to the Blues 2.0 (12) in the final quarter to lose by only 11 points after being well behind all day. It is no secret that John Nicholls is not as tough or demanding a coach as his Carlton predecessor Ron Barassi, and this might be showing up in the side's lack of killer instinct. Besides this, Carlton also has worries at full-forward. Greg Kennedy is a highly promising player but he does not yet appear to be the answer at full-forward. Kennedy was well beaten by Melbourne full-back Ray Biffin, and only managed to kick two goals to boost his tally to 46 goals from 15 games. - Graeme Kelly; The Australian. 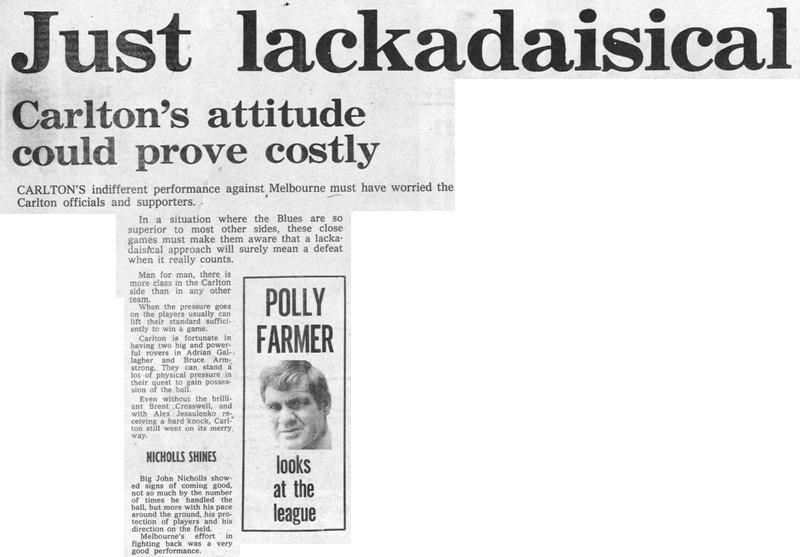