St Kilda were hammered by the Blues for a third time in eight years when the two teams met once more at Princes Park. Adding to a joyous celebration of champion defender Bruce Doull’s 300th game, Carlton unleashed a trademark third-quarter blitz of nine goals to snuff out the Saints’ hopes, and the final margin was a new record 107 points.
In a very even team performance, ruck-rover Spiro Kourkoumelis stood out. Gathering possessions at will, he kicked three goals, while nine other Blues scored two or more, in a heavily one-sided contest.

Carlton's Spiro Kourkoumelis was awarded the three votes after Saturday's game. He was constantly sending the Blues into attack, Kourkoumelis was a prominent member of the strong Carlton side and has had a very consistent season to date. - Inside Football Player of the Year. 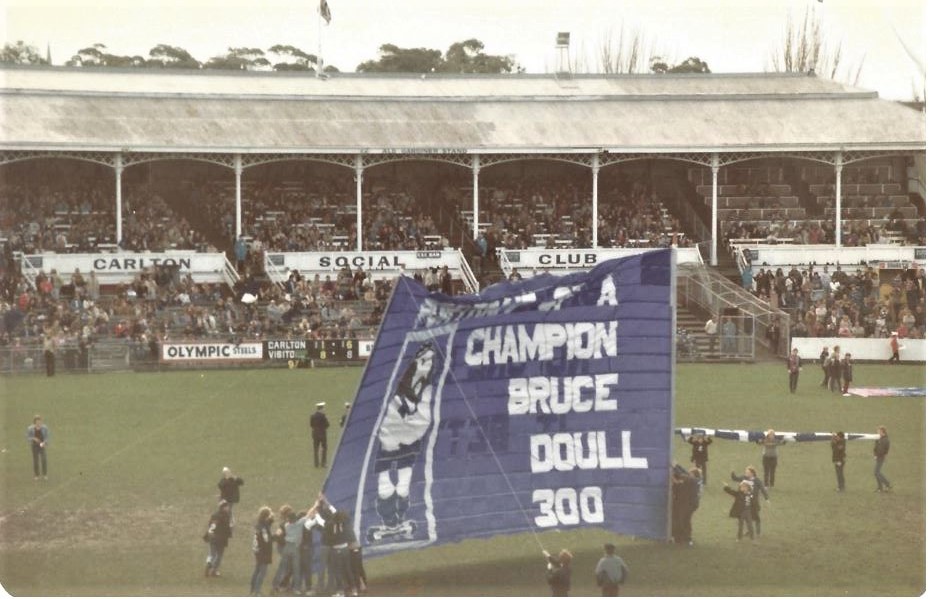 This is the Round 15 banner.
From Rnd 15 , 1983 "Many Carlton supporters who went to Princes Park this day thought they would see Bruce Doull's 300th game for the Blues, but they were misled. This was in fact Bruce's 297th match, due to a change to how games were recorded in the VFL records. Originally, when interstate games were held at the same time as home & away matches, players selected for their states were credited with a home & away game. Because this was changed and representative games were recorded seperately, Doull's actual 300th game occurred in round 19, 1983 against St Kilda - a 100-point win that was a more fitting result for the great man."