Carlton edges out Hawthorn by 2 points at Princes Park. 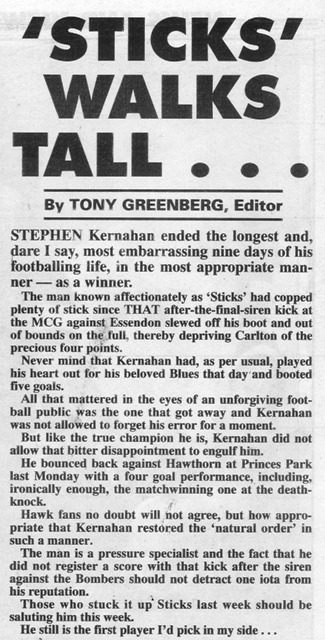 The Blues would finally take a close one, after a narrow loss in Round 1 and the nailbiting draw to the Bombers in Round 2.

Led by Captain Stephen Kernahan with 4 goals, and the General in defence, Peter Dean, the Blues would kick 11 goals to 8 in the second half to storm home and take the game from the as-yet undefeated Hawks.

Dean would take the 3 Brownlow votes, Kernahan 2, and Silvagni would lower his colours to Hawk Champion Jason Dunstall who would kick 5.

But the real story of the day was the finish, and a chance of redemption for Captain Kernahan. With a Carlton surge to get the lead, Welsh goaled to get us in with a shot, then Sticks marked near the 50, pretty much straight in front, with the pressure was on after the previous week. He didn't waste any time, hurried back from the mark and kicked the goal to drill a beauty.

The crowd went mental; people were high-fiving and hugging each other even though they had never met before, it was a fantastic feeling being there!!!

And Ray Jencke became the latest Hawthorn player to employ violence on the football field.