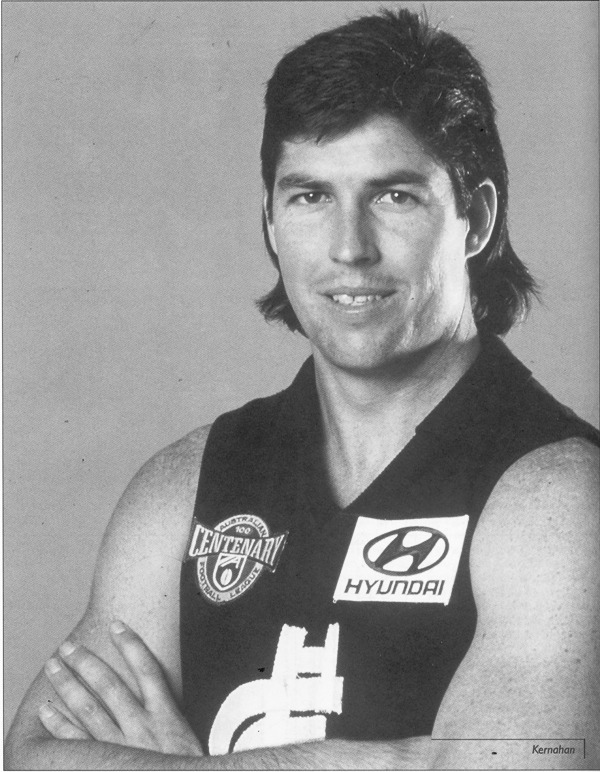 The numbers are impressive enough - 251 games, 738 goals, All-Australian, twice captain of Carlton Premiership teams, three times club Best & Fairest, captain (and leading goal-kicker) for eleven seasons in a row - yet this fabulous record only goes part of the way toward explaining why Stephen 'Sticks' Kernahan is revered as one of Carlton's greatest players and most inspirational leaders.

Sensationally appointed captain of the Navy Blues in only his second season of VFL football, Sticks led by example throughout his career. Courageous and skilful, he was surprisingly good at ground level and a glorious high mark. While his kicking style often seemed awkward, time after time he slotted crucial goals when it mattered most. He was at his very best on big occasions and scrupulously fair on the field, winning the respect of team-mates and opponents alike.

The Stephen Kernahan at Carlton story began in 1979. The club’s Promotions Manager at that time, Shane O'Sullivan, was about to head to Perth for that year's ANFC Schoolboy Championships when Chairman of Selectors Wes Lofts jokingly said to him; 'Shane, find me another Royce Hart.' O'Sullivan came back a few days later and said, 'I think I've found him.' A sixteen year-old, tall, skinny forward from South Australia - son of Glenelg Football Club legend Harry Kernahan – was one of stars of the carnival, and the chase for his signature had begun. Essendon, Melbourne and Carlton led the pack.

O’Sullivan was hell-bent on getting Sticks into navy blue, and for the next three years he stayed in regular contact with Stephen and his dad. The youngster continued to impress as he rose through the ranks at Glenelg, where he made his senior debut in 1981. In ’82, after thorough discussions with three VFL clubs, Stephen finally agreed to sign with Carlton - but he honoured his father’s wishes with the proviso that he would only transfer across when Glenelg had won another SANFL Premiership.

In 1983 Sticks was sensational. He polled 43 votes in the Magarey Medal – 8 more than runner-up Tony Antrobus – but Antrobus took home SA’s most prestigious individual honour because Kernahan had been suspended during the season. Sticks still won Glenelg’s Best & Fairest – the first of three in a row. Then in 1985, the moment that both Carlton and Glenelg were yearning for arrived. At last, the Bays beat North Adelaide in the SANFL Grand Final to win only their third flag after a 12-year drought. Alternating between the key forward posts, Kernahan was unstoppable all day to be unanimously voted best-on-ground. He was the club’s leading goal-kicker for the second time, on the way to being named All-Australian centre half-forward. No wonder the phone ran hot between Adelaide and Princes Park in the days after that Grand Final! 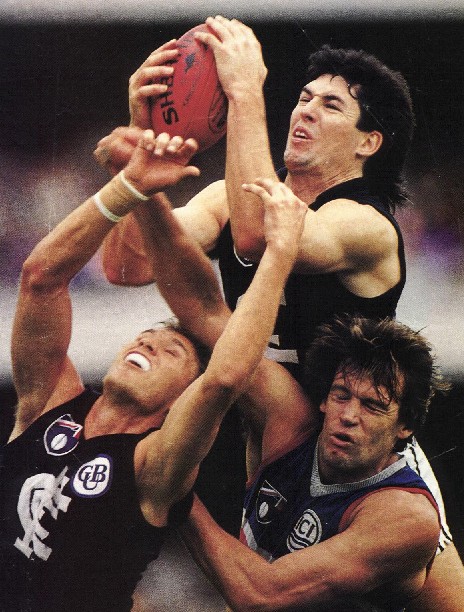 After 136 games and 290 goals in Glenelg’s black & gold, Sticks arrived at Carlton in 1986 to join a Blues’ outfit shaping as a flag threat under new coach Robert Walls. By then a seasoned 22 year-old, scaling 196cm and 97kg, Kernahan slotted straight into the team and made an immediate impact as a key forward, in tandem with Blues’ captain Mark Maclure. Carlton wound up Sticks’ first home & away season in third place, and accounted for Sydney in a torrid Qualifying Final. They then caused a huge upset by knocking over hot favourites Hawthorn in the second Semi Final, only to be out-gunned in a Grand Final rematch. The Hawk forwards were unstoppable that day, blitzing Carlton by 42 points in Blues’ legends Bruce Doull and Mark Maclure’s last match. As compensation, Carlton fans knew afterward that the club had unearthed three future champions; Craig Bradley, Peter Motley and Stephen Kernahan.

Sticks was the Blues’ top scorer of the year with 62 goals, and was named All-Australian for the second time. Then, early in the following year, Carlton shocked the football world by announcing that Stephen Kernahan, after less than 30 games for the club, would captain the Blues in season 1987. In hindsight it was a master stroke, but at the time the decision was widely questioned.

It is now recognised that Carlton’s 1987 Premiership was, to a large degree, won in the final home and away round of that year, when Carlton met North Melbourne at Waverley. Needing a win to guarantee top place on the ladder and a crucial week’s rest in the first round of the finals, the Blues struggled most of the day against the ‘Roos, who led by 2 points with seconds remaining.

It was then, at a boundary throw-in, that Blues' ruckman Justin Madden plucked the ball out of the air and kicked it forward as hard as he could. Camped under it, Sticks was sandwiched between two North defenders - but somehow, he climbed higher than both of them to take a fabulous pack mark, 40 metres out on a tight angle - just as the siren sounded. Under enormous pressure, he slotted the definitive captain’s goal, and the Blues were on their way to another Grand Final.

Refreshed after gaining that much-needed break, Carlton went on to beat Hawthorn in the second semi, and lined up against them again in the Grand Final. On a scorching-hot day it was a tough, tight first half, before Carlton broke the Hawk’s will after half time to claim our fifteenth flag with a decisive 33-point victory. The Blues’ defence was magnificent, while Sticks proved a handful for Hawthorn’s champion Chris Langford, marking strongly all day to kick three goals at pivotal stages of the game. Then, to round out a memorable first year as captain, he went on to win his first Best & Fairest award, and was the club’s leading goal-kicker with 72 majors. Kernahan became the first South Australian to captain a VFL Premiership side when he led the Blues to that (then) record 15th flag.

It was no surprise at all that when the Adelaide Crows were looking for a captain to lead them into their debut AFL season in 1991, they set their sights on Kernahan. The Crows were prepared to pay whatever it took to lure their champion back to South Australia. He was a fixture in SA state teams, and an obvious prime candidate. Fronted by Sticks' close mate Chris McDermott, the Crows tried every possible avenue to lure him back across the border, but to the joy of every Bluebagger he decided instead to stay at Princes Park.

The Blues were not to appear on Grand Final day again for six years, but in the interim, Sticks enhanced his standing as one of football’s elite. He won his second club Best & Fairest in 1989 and his third in 1992, while continuing his unbroken run of club goal-kicking awards. His decision to stay with Carlton bore fruit when the Blues marched into the 1993 Grand Final as warm favourites against a young and promising Essendon. But in one of the great Grand Final performances, the sheer pace and tenacity of the Bombers proved unstoppable, and Carlton lost by 44 points. The only saving grace for the Blueboys was the gutsy performance of their captain, who booted seven of Carlton’s thirteen goals. 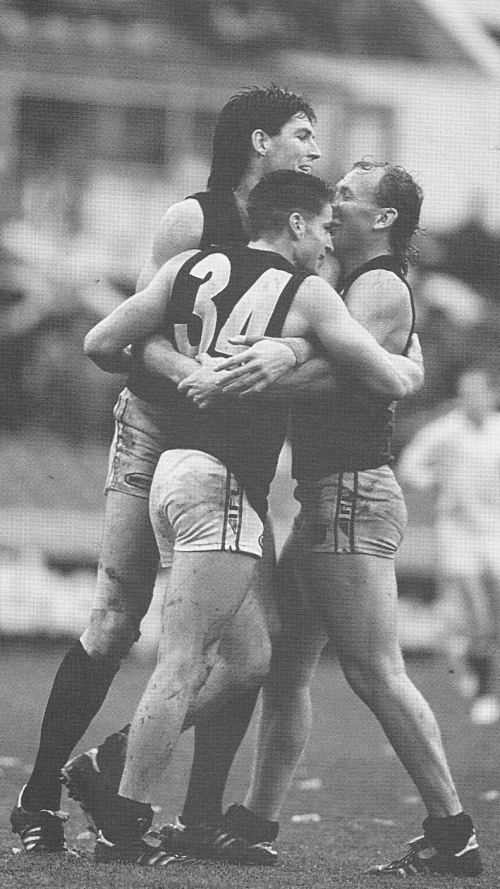 Happily, the bitter taste of that defeat was washed away after just one season. By the first game of 1995, the Blues were once more bound for glory. Some astute recruiting and the emergence of young stars like Anthony Koutoufides and Scott Camporeale brought a new-look team that lost two games early in the season, then clicked into top form to win their next 13 matches on the trot. The finals began with Carlton four wins clear on top of the ladder. Two more victories over Brisbane and North Melbourne followed, to see the Blues through to a Grand Final showdown with Geelong. The Cats had been impressive too, and they had a superstar named Gary Ablett in their goal square.

When more than 90,000 people packed into the MCG that overcast September day, they saw Carlton demolish Geelong in one of the most emphatic Premiership wins ever. Stephen Silvagni kept Ablett to just a handful of possessions and no goals, Greg Williams was brilliant across half-forward and Sticks marked strongly as usual to notch five goals at full-forward. The final margin was 61 points. At the celebrations that night, Carlton President John Elliott echoed the opinion of most Carlton supporters when he said; 'this is the greatest team in Carlton’s history – and Stephen Kernahan is our greatest captain.' Although nagging injuries had kept Sticks out of the side for eight games in that dream season (he had missed just four games in the previous nine years) he was our top goal-kicker, with 63 majors, for the tenth time in a row. And because he missed selection in those two early defeats, he did not play in a losing Carlton side all year.

Buoyed by success, Carlton looked forward to another good year in 1996. The team began well, but a continuous series of injuries to key players – including Sticks – meant defeats late in the season that cost dearly. The Blues limped into fifth place in an expanded final eight, only to lose both semi-finals in straight sets to the looming interstate powerhouses West Coast and Brisbane. One of the few bright spots in a disappointing year was Kernahan’s season tally of 56 goals, which won him his eleventh successive club goal-kicking award.

Season 1997 brought the curtain down on the careers of three Carlton champions; 'Harry' Madden, 'Diesel' Williams, and Kernahan. All would prove irreplaceable. Sticks managed just 16 matches and 23 goals that year, as the Blues slipped out of finals contention. Aged 34, his 16 years of top level football in Victoria and SA had ended after more than 400 senior appearances. His career tally of over 1000 goals included 738 at Carlton – a club record. He is the Blues’ longest serving skipper, wearing guernsey number 4 throughout his time at Princes Park.

With his distinctive mullet hairstyle, laconic sense of humour and less than ideal singing voice, he livened up many social gatherings at Carlton, meaning that most of the post-Premiership celebrations during his time have passed into club folklore. He was inducted into the Carlton Hall of Fame in 1993 while still playing, and in May 2000 he was named centre half-forward in Carlton’s Team of the Century. But perhaps the most tangible example of Sticks’ standing within the game came in the AFL Centenary year of 1996, when a large group of current and previous club captains were polled on their opinions on a range of subjects. One of the questions was, "who is the best captain of a rival club?" and there was one clear winner; Stephen Kernahan – the captain’s captain.

Well into the 21st century, 'Sticks' remains a highly-influential figure at the Carlton Football Club. Midway through 2008 he took over the role of Club President after Richard Pratt stood down, and held the post through to 2014, when he was succeeded by Mark LoGiudice. In June of that same year, during Carlton's 150 Year celebrations, he was named as one the five greatest Blues of all time, alongside John Nicholls, Bruce Doull, Alex Jesaulenko and Stephen Silvagni. 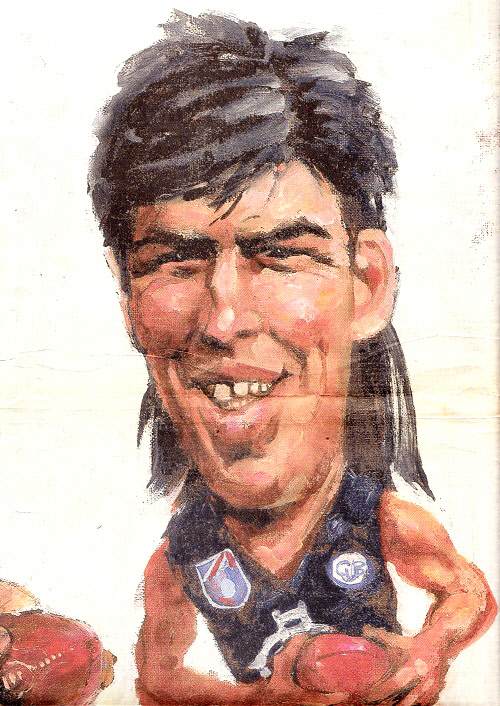