Carlton returned to the winner's list with this 23-point win over Hawthorn at Glenferrie Oval.

“I thought a football match was supposed to last 100 minutes, but Serge Silvagni shot a big hole in that theory in the Carlton-Hawthorn clash. Silvagni punted a 60-yarder half a minute from the start. Five minutes later Carlton had four more, and Hawthorn had had it. Just to prove the burst wasn’t a fluke the Blues repeated the dose in the third quarter by knocking Hawthorn right out with another bunch of five. Both times it was Silvagni who led the surge that gave the Blues victory. He wouldn’t win a place in a Bruce Andrew footy test book – sloppy style, socks down, corkscrew kicks – but he was as popular as pizza pie in Carlton after his inspiring game” Lou Richards, Herald (?).

That little paragraph just about sums up the whole game. Silvagni started the Blues’ brilliant run. He turned in a great game and certainly showed that he is not finished. His co-operation with John Nicholls was the feature of Carlton’s win. Nicholls himself won continually in the ruck. 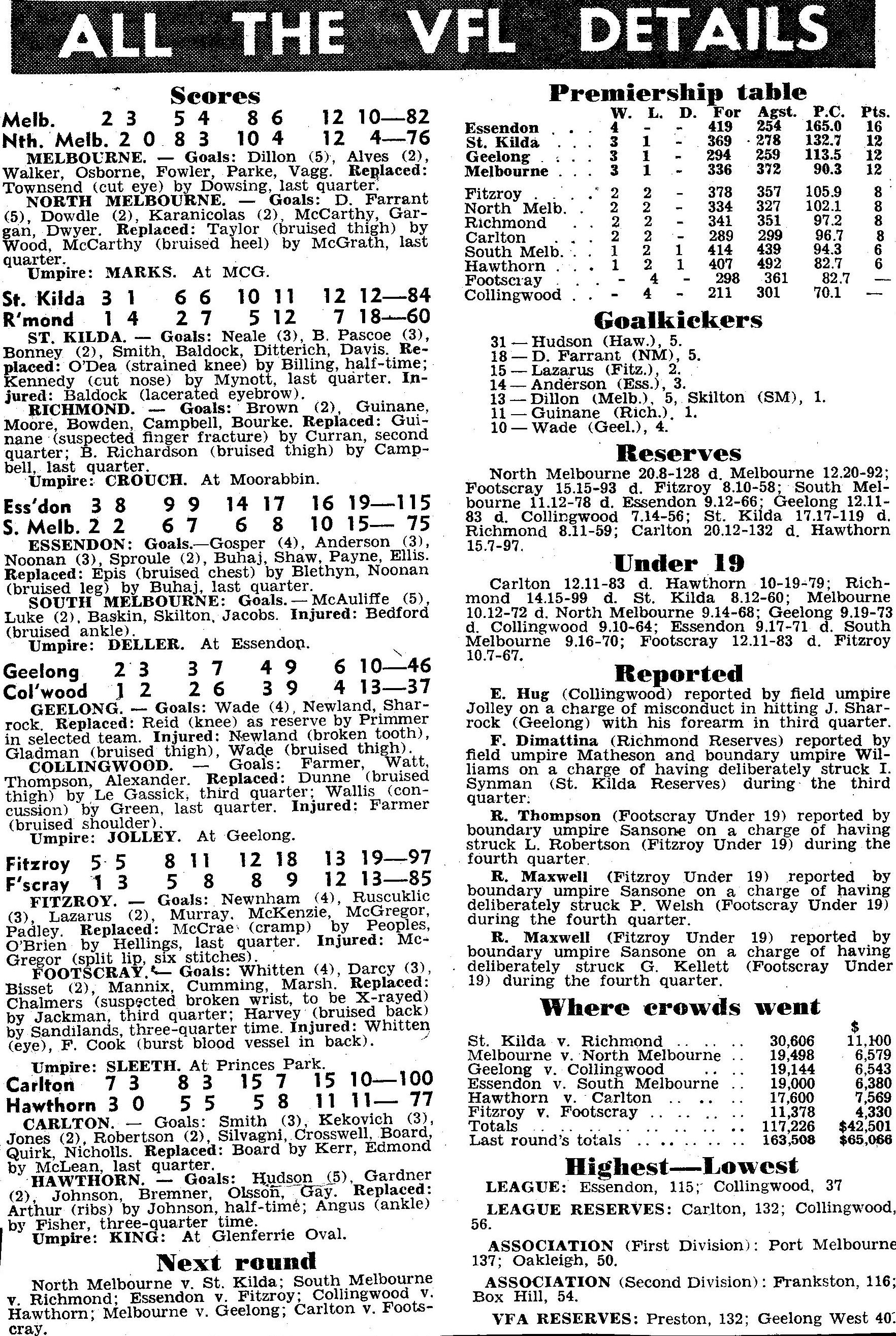 After the first quarter, it was obvious that the umpire was not quite up to standard. He handed out touchy frees to both sides and let obvious ones go. He was not consistent in the fact that he would pay a free on minute and completely ignore a similar incident the next.

Hawthorn picked up a little in the second quarter but could only manage 2-5; they kept Carlton down to 1 goal. The Carlton half-backs were on top and Hudson was receiving quite a bit of attention.

The third quarter saw Carlton race away and add another 7 goals. The ones that stand out are Brent Crosswell’s who grabbed the ball out of the centre, executed a brilliant blind turn, ran his 10 yards and drop kicked the ball through the sticks. Bryan Quirk received a free midway between the wind and half forward flank right on the boundary. He kicked a beautiful 50 yard drop punt goal. But the classic goal of the quarter was kicked by John Nicholls – he scooped up the ball in the forward pocket, baulked brilliantly around 2 Hawthorn defenders and with a well judged left foot punt kick coolly put it through for a goal from the boundary.

I left the ground at ¾ time darkness descending and a wind howling straight down the ground. Hawthorn was kicking with the aid of this wind. Barassi stacked the back-line. Hawthorn however managed to kick 6 goals but their run was too late as I felt Carlton had it won in the first 7 moniutes of the game when they kicked 4 goals. Umpire King ruined the game as a spectacle by not allowing it to flow and ridiculously holding up play by insisting upon the man being right on the mark.

Clearances took up a big part of the news. There was annoyance that the Western Australian League was holding up clearances for Bert Thornley and Syd Jackson to Carlton.

Score Records: This was the first of 10 consecutive wins for Carlton, one of the best winning streaks in our history