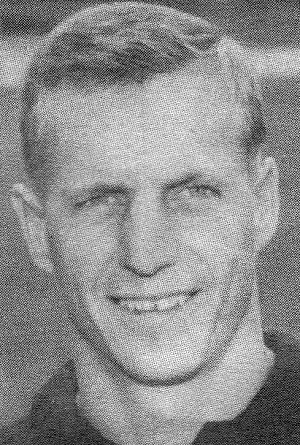 Gilbert Thomas “Bert” Thornley will forever be remembered as the player Carlton coach Ron Barassi dragged at half time in the 1970 Grand Final – allowing reserve Ted Hopkins to boot four goals and spark the most famous revival in Grand Final history.

A nuggety rover, Thornley had been captain-coach of East Fremantle in the WAFL prior to joining the Navy Blues at the age of 26 in 1969. By then Barassi had been a fan of Thornley for some time, and was reportedly elated when the young veteran agreed to terms. Happy to accept guernsey number 13, Bert made his senior debut for the Blues in a good win over Footscray at the Western Oval in round 3, 1969 – the same match in which David McKay also began his illustrious career.

Thornley played nine games in his debut season, highlighted by an impressive 27-disposal effort against South Melbourne in round 16 – but by years’ end, Bert’s strengths and weaknesses were plain to see. Although he fearlessly bored in after the ball, and took a good mark for his size, he gave away a lot of free kicks and was yet to see a goal umpire wave both flags. That worrying drought lasted through until round 11, 1970, when he eventually kicked his first goal in a huge win over Melbourne at Princes Park.

In September of that year, Carlton started their finals campaign from second rung on the ladder against Collingwood. Thornley was serviceable with 13 disposals and two goals in his first taste of September action - Carlton’s Semi Final loss to the Magpies – only to be hardly sighted the following week when the Blues demolished St Kilda in the Preliminary Final to earn another crack at Collingwood in the flag decider. Despite some misgivings within the match committee, Bert was retained in the side and ran out onto the MCG on Saturday, September 26 to the roars of huge crowd of almost 122,000.

The saga of the 1970 Grand Final is well known. Comprehensively out-played in the first half, Carlton trailed Collingwood by 44 points at the long break and the game should have been over. But with nothing to lose, Barassi gambled on a tactic he had been nursing for years. After telling Thornley that his afternoon was finished, Barassi sent 19th man Ted Hopkins on to the ground in a forward pocket, then told his team to play on and keep the ball moving at all costs. A miracle unfolded, and in the most famous comeback in finals history, Hopkins ran riot, kicking four goals as the Blues steamrolled Collingwood to win by 10 points.

Thornley was understandably devastated by being dragged, and he never played for Carlton again. But to his immense credit he could be found front and centre in the celebrations and has remained faithful to the club ever since. He is always on hand when the 1970 team re-unites every decade, and after one such get together he explained his feelings this way. “I was shattered when Ron Barassi took me off,” he said, “because there were a few of us that hadn't done much. I was playing as second rover to Adrian Gallagher, and he would tell you he didn't do much in the first half either. But I never questioned Barassi's decisions because I had enough faith in him to know it was right for the team, and I remain very proud of that. It was a great side, and a great club.”

After leaving Carlton, Thornley played at VFA club Preston in 1971, Thornley, was a strongly built defender from Western Australia, he played just one year at Preston. Thornley would later coach at Torquay.