Carlton lost to Collingwood by 64 points at Princes Park.

The game settled down after that fiery start, and by half-time Carlton led by five points. But in the third term, Collingwood came out smokin' and simply blew Carlton away, kicking 12.5 to Carlton's two behinds to take a strangle hold on the match. The ill-fated John Greening was a star for the Magpies in this term, and he ended the game with seven goals to his name. Tensions boiled over again in the last quarter, and Len Thompson (Collingwood) was reported by field umpire Sleeth and goal umpire Robinson for deliberately striking Vin Waite. Ted Potter (Collingwood) was reported by field umpire Sleeth for deliberately striking John Nicholls, and Ricky McLean went into the book again, reported by field umpire Sleeth and boundary umpire Williams for deliberately striking Magpie Brian McKenzie.

At the final siren, the margin in Collingwood's favour was 64 points, and the story of the game was the mass of reports - however, all of these players were later cleared of the charges.
Why? Well, it seems that after the match, field umpire Ray Sleeth and a Carlton official became involved in a heated discussion over the procedure for submitting reports, and the Blues officially protested to the VFL over the time taken to inform the club that Jones and McLean had been cited. For once, the VFL upheld Carlton's complaint - and all charges were dropped!

Hirsute pursuits?
Hair issues appeared to have derailed the Blues in this particular match. The following game review tells the story:

This was the week of the battle of the hair. 'Get those sideburns chopped back, or else,' coach Ron Barassi told four long-whiskered Blues - Peter Jones, Wes Lofts, Brent Crosswell and Adrian Gallagher. Although it was whispered at the time that Barassi couldn't grow sideboards himself the players agreed with the order and had trims. Collingwood beat Carlton in a game that was followed by eight reports against four players. But in a sensational decision all charges were thrown out by the tribunal on the technicality that the umpires had not told club delegates about the proposed reports immediately after the match. 'What a farce' said The Sun newspaper in an editorial. There was talk of a strike by umpires, but it was smoothed over in the end. - Football Life. 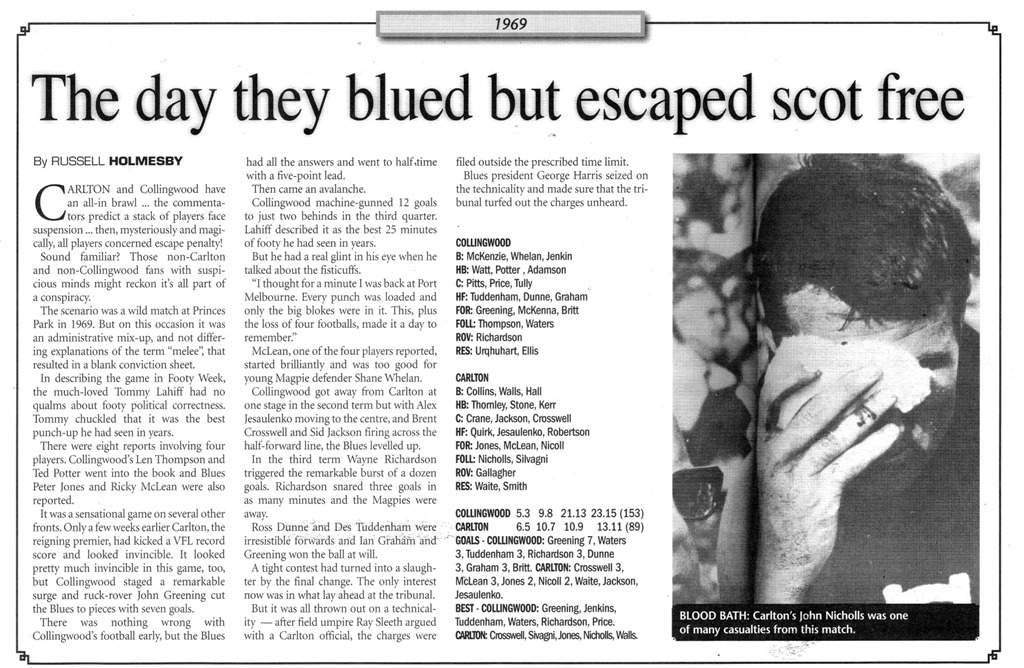 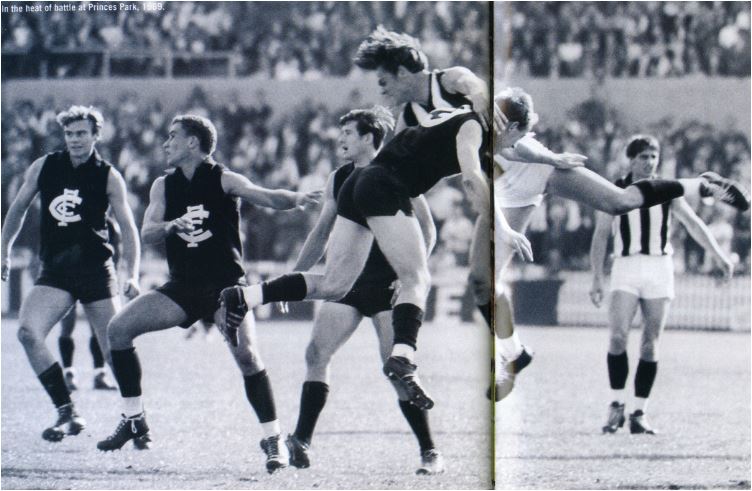