Point Percy at a Premiership... 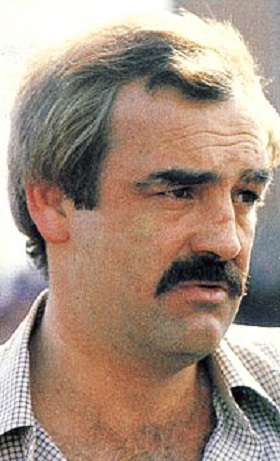 Part actor, part comedian and an all-round quality footballer, Peter 'Percy' Jones stands as one of the truly unique characters in the long history of the Carlton Football Club. A four-time Premiership player, his unbounded enthusiasm on the field - and his legendary exploits off it - endeared the lanky Tasmanian to generations of Blues' fans after he arrived from North Hobart in 1966 as a gangly 20 year-old. A serious car accident soon after his arrival injured both of his legs, but he recovered in time to play the last three games of the year, and showed enough for Carlton’s new coach Ron Barassi to persist with him.

By 1968 'Percy' had settled into the senior team as understudy to John Nicholls in a forward pocket, where his strong marking and accurate kicking was a valuable to team morale as his mad-cap antics in the dressing room. Out on the field, his effusive joy at every Carlton goal - whether it was kicked by himself or a team-mate - began to create something of a rat-bag persona that bewildered supporters at first, but his Chaplinesque reaction whenever a free kick was awarded against him was always hilarious. All of this was just a sideshow however, because within four years Percy had proven himself a real asset in both the 1968 and 1970 Carlton Premiership teams, and from then on the Jones legend unfolded.

In August 1971 at the Junction Oval in St Kilda, Carlton were playing Fitzroy in a game crucial to the Blues' finals chances. The match started in sunshine, but just after the half-time break a thick fog rolled over the ground from nearby Port Phillip Bay. It was so dense that players only a metre or so apart couldn't see each other, while the time-keepers caught only glimpses of the players and had to rely on the emergency umpire to relay the occasional scores. Late in the last quarter, the Blues were deep in trouble on the scoreboard, when the ball came bouncing past Percy, who had dropped back into defence. 'There it is!' he shouted - and a Fitzroy opponent pounced on the ball and goaled. Carlton lost an extraordinary game, and missed that year's finals by two points!

Forgiveness didn't take long however, because Percy atoned with a dominant display against a powerhouse Richmond in the 1972 Grand Final. The Tigers went in as hot favourites after drawing with, then beating Carlton in the second Semi Final. The Blues then had to fight through a tight Preliminary Final against St Kilda, while Richmond had a week off. John Nicholls had replaced Barassi as Carlton's coach and decided on a bold strategy in the decider. He made eight positional changes, including placing himself at full-forward and handing Percy the daunting task of single-handedly taking on the Tigers’ ruck division. Then he told the Blues to attack at all times, and to ignore the inevitable defensive errors and turnovers. 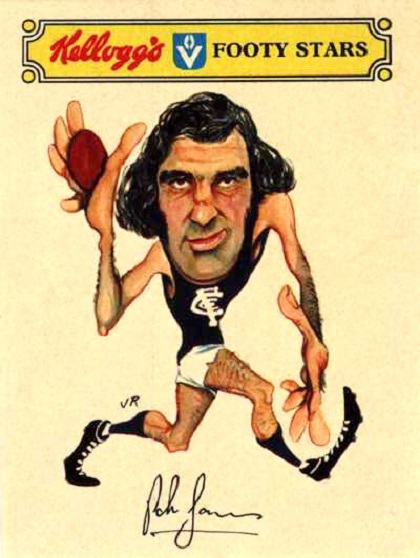 The plan and the switches worked brilliantly, and Carlton won by 27 points in the highest-scoring Grand Final of them all. Jones was superb all afternoon, rucking unchanged to dominate the Tigers' big men, while Nicholls himself bagged six goals. If there had been a Norm Smith medal available that day, Percy would surely have been a contender. Boosted by that performance, and on top of his game, Jones was consistently good throughout 1973 and deservedly won the Blues' Best & Fairest award. On the field, his exuberance was at its height. The Carlton faithful loved his antics, while he drove the opposition to distraction.

On one famous occasion, he played on after a mark in the goal square. But as he tried to drop the ball on to his boot, he missed - and kicked the goal post! On another, he lit a firecracker in the Carlton Social Club while Prime Minister Malcolm Fraser was watching a game, and created mayhem. Late in his career, he was struggling to keep up in a pre-season training run when a tram appeared, so Percy jumped on board to ease his aching legs. He might have gotten away with it, too - except that Carlton's fitness adviser at the time was standing nearby when Percy hopped off!

Jones' career culminated with the 1979 Premiership. By then aged almost 33 and somewhat in the shadow of Mike Fitzpatrick, Jones responded to his captain-coach Alex Jesaulenko, who challenged the big bloke to show his doubters that he wasn't a spent force. Percy gave his all that day; more than holding his own in the ruck as the Blues knocked over Collingwood by five points, thanks some last-gasp brilliance by utility Wayne Harmes.

In the ructions that split Carlton over the summer of 1980, Jesaulenko resigned when George Harris lost the Presidency to Ian Rice, and Percy retired as a player to take over as senior coach. Unfortunately, although the Blues playing list was as strong as any in the VFL, Jones struggled to connect with his former team-mates. Carlton made the finals, only to lose twice in a row and bow out. In one of those games, against Richmond, Percy was leaving the field after the quarter-time break when he noticed sports psychologist Dr. Rudi Webster in the Tiger's huddle. Webster had spent 1979 at Carlton, but wasn't retained for 1980 and had joined the Tigers. Incensed at what he saw as betrayal, Perce let fly verbally at Webster. Richmond coach Tony Jewell then stepped in, and suddenly fists were flying. Cooler heads prevailed before anything more than pride was damaged, but Carlton lost and Richmond went on to win the flag. Jones was then shifted sideways. David Parkin became the new coach, and Percy was appointed to the club committee, where he served loyally and cheerfully in various positions for many years.

In his thirteen seasons at Princes Park, Percy wore his number 28 guernsey in 249 games. He kicked 294 goals - and let the world know all about every one of them. An influential member of four Premiership teams, he was a Best & Fairest winner, a state representative, vice-captain, board member and club legend. And he did it all with a kind of mischievous glee.

After football, Percy ran a couple of inner-Melbourne hotels in partnership with his former team-mate Adrian 'Gags' Gallagher. The best known of these was the Blush & Stutter in Carlton. At one time he also stood for election to the Victorian Lower House, using the wonderful slogan; 'Point Percy at Parliament.'

Adding to his long list of awards, Jones was elevated to legend status in the Tasmanian Football Hall of Fame on July 5, 2013.