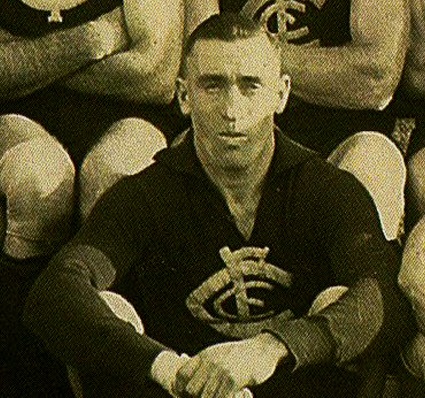 In March 1935, one of the most tragic moments in the history of the Carlton Football Club occurred when the Blues’ promising wingman Terry Ogden died in hospital aged just 23. The previous year, Terry had played 15 consecutive games for Carlton in an excellent debut season. He had seemed on the verge of a good career, until he fell mortally ill after a pre-season training session at Princes Park, and steadily declined. His death shocked not only the football community - his funeral was attended by dozens of people who didn’t know him personally, but were touched by the tragedy of his passing.

Born in suburban Northcote in 1911, Terrence William John Ogden grew up in a keen sporting family. From an early age he watched his father, Percy Ogden, roving for Essendon and Victoria, while both Terry and his older brother Gordon became stars in schoolboy football and athletics. Terry started his junior football career at Northcote CYMS, before following his father to Essendon. He played Reserves football at Windy Hill, but couldn’t crack the big time, so in 1932 he joined his brother at Melbourne, where Gordon had become one of the Redlegs’ most reliable defenders.

Terry made his senior debut for Melbourne against Hawthorn in the 14th round of 1932, and played three matches in succession. However, he found the going tougher in 1933, and although he was member of the Redlegs’ Reserves Premiership team, he wasn’t able to earn promotion to the senior side again. Season 1933 saw Terry on the move once more – this time to Hawthorn, where again he played all season with the seconds.

In a case of third time lucky, Terry crossed to Carlton in 1934 and found his niche on the spaces of centre wing. His pace was his major weapon – he was to win two professional gifts over the summer months – and his confidence grew as his place in the team became secure. In guernsey number 27, Ogden played his first senior match for the Blues in a victory over Geelong at Princes Park in round 4 of 1934, and from then on was a mainstay of the team. Carlton finished the season in fifth place on the ladder and probably looked forward to the next season with confidence – until February 28, 1935, when an Argus newspaper report brought alarming news.

"Mr. N. Chandler and Mr. H. Clover, respectively secretary and delegate for the Carlton club, offered their services for a blood transfusion when it was announced that the club's wingman, Terry Ogden, was seriously ill. After a blood test, Mr. Chandler was accepted, and the transfusion took place. Ogden, who is suffering from pleurisy in both lungs, is in the hospital at Fairfield. It was said that he had improved yesterday."

Terry had trained at Princes Park shortly before being rushed to hospital, and despite the best available treatment, he died only a few days later, on 2 March 1935. Among the pallbearers at his funeral were Dan Minogue, Mocha Johnson and Charlie Davey, Many years afterward, a family descendant uncovered a death certificate which stated that the player “died from osteomyelitis of the left scapula (shoulder blade) and septicaemia”.

Had Terry been bumped hard, or fallen heavily at training – breaking his collar bone, and inviting infection? That possibly is the case, but it seems that now we will never know for sure.

In the wake of Terry’s death, Carlton players resolved to honour the memory of their “manly and brilliant little player” by presenting to the club a trophy known as the Terry Ogden Memorial Trophy, asking that it be presented at the end of each season to the club’s most improved player.Although Carlton was happy to comply, over time the Ogden Trophy was awarded for other achievements. The Blues’ Most Improved Player Award was called The Terry Ogden Memorial Trophy between 1935 and 1950. From 1951 to 1954 it was given to the player finishing 3rd in Carlton's Best and Fairest Award, and from 1955 to 1958 (although the name appears to have been used intermittently thereafter) it was presented to the Best First Year Player.

Authors Hugh Buggy and Harry Bell in "The Carlton Story" noted:
A sad loss suffered by the club was the untimely death of Terry Ogden, a capable and manly player, who was very well liked by his team mates. The players decided to honour his memory by presenting to the club a trophy to be known as the Terry Ogden Memorial Trophy, for the most improved player.

A Tribute To Terry

80 years after his death, Terry Ogden was remembered in an extensive article by Carlton Football Club historian Tony De Bolfo on June 24, 2015.
To read the story, click here> www.carltonfc.com.au/news/2015-06-24/a-tribute-to-terry