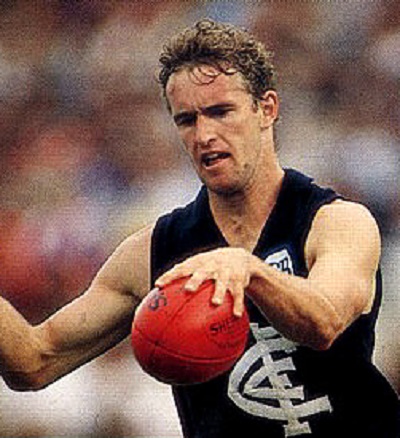 A smooth-running midfielder with impressive disposal skills, Tim Rieniets played in five Premiership teams – four in the VFA, and one with Carlton Reserves - in a notable football career that included 24 senior matches over two seasons with the Navy Blues in 1990-91.

Rieniets was born in Creswick in central Victoria, and educated at Galen College, Wangaratta. By his teens, he was a standout junior player for Wangaratta College FC and Wangaratta Rovers, and in 1985, he was recruited by North Melbourne. In two seasons at Arden St, Tim played 32 Under-19 matches and 13 Reserves games without breaking into the senior team, so early in 1988 he crossed to VFA club Coburg, and quickly became one of the stars of the competition.

Coburg’s back-to-back Premiership triumphs over Williamstown in 1988-89 were largely due to Rieniets’ brilliance in the centre – prompting his captain, VFA legend Phil Cleary, to say later that Tim had “played like he was superhuman” in both Grand Finals. On the back of those two Best on Ground performances, Carlton swooped on Rieniets with pick 27 in the 1990 Pre-Season Draft, along with his team-mate Adrian Bassett. Rieniets would play 57 games and boot 42 goals for the Lions.

The Blues’ judgement seemed sound at first, especially when Reiniets came off the interchange bench and goaled with his first kick (and perhaps his second - but not even the player himself remembers clearly) in his senior debut against his former club North Melbourne in round 6, 1990 at Princes Park. Eleven more matches followed, although by late in the season it was obvious that Tim’s future lay in defence. In September, his debut year concluded on a high note when he played across half-back in front of a huge crowd of 96,000 at the MCG on Grand Final day, when Carlton Reserves scored an upset victory over Melbourne.

Unfortunately for Tim, that was to be the pinnacle of his career at Carlton, because after 12 more appearances in 1991, he suffered a partial tear in a knee ligament in round 18 of that forgettable year, and was not to be seen in the Carlton seniors again. He did manage to play some Reserves football in 1992 after a full pre-season, but ended up back in the VFA at Coburg and was delisted by Carlton at season’s end.

In 1993, Rieniets and his team-mate Dominic Fotia agreed to join another VFA club; Werribee, and it wasn’t long before Tim rediscovered his best form. The Tigers upset Port Melbourne in that season’s Grand Final (played at Princes Park) and Rieniets collected his third Premiership medal.

Flag number four came along in different colours again. In 1997, Rieniets moved on to play with Sandringham, and the Zebras demolished Frankston in a fiercely-contested Grand Final at the Port Melbourne ground, with Rieniets outstanding in a back pocket. Many believed that the 31 year-old was unlucky not to be awarded Best on Ground that afternoon, in his last finals appearance before his retirement at the end of 1998.

Rieniets was only the 11th player to wear guernsey number 36 into a senior match for Carlton, and after his departure, it would be another five years until it returned to the field with Aaron Hamill.

Outside of football, Rieniets worked as a clerk with the Melbourne City Council.