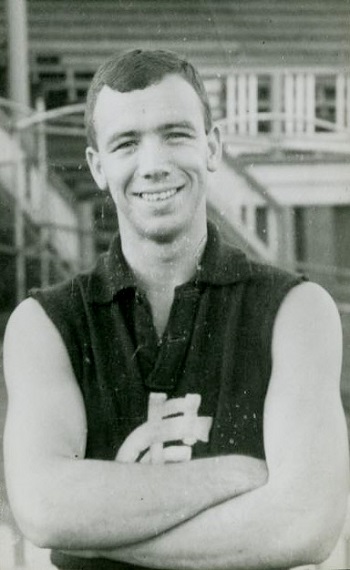 Vasil Varlamos was a rugged half-back flanker of Greek parentage who was a popular clubman during his five seasons at Princes Park from 1960 to ’64. Born at Broken Hill, NSW, he was recruited by the Blues as a promising 17 year-old from bayside Mentone, and made his senior debut on the day after his 18th birthday in 1960.

By 1961 Varlamos was established as a regular senior player. A close-checking, hard-at-it type with good concentration, he played his football hard and collected some impressive scalps in his first two seasons, while the Blues posted consecutive mid-table finishes. In 1962, Carlton improved markedly to finish fourth, and fought their way through to meet minor premiers Essendon in the Grand Final. Varlamos made the team as 20th man, but got only the briefest of runs in the final term, as the Bombers proved far too good and won by five goals.

Following that defeat, Carlton went back into decline. Vasil played another 17 matches over 1963-64, until his tenure at Princes Park was ended with his clearance to fledgling VFA club Waverley for the 1965 season. The Panthers had been admitted to the Association's first division ahead of schedule, and were actively recruiting under their captain-coach Ian Thorogood – himself a future coach of the Blues.

That proved to be a fortuitous move indeed for Varlamos, because while the emerging Panthers were a revelation in their debut year, he himself struck a rich vein of form at centre half-back. After representing the VFA in matches against WA and Tasmania during the year, he was one of Waverley’s best when they swept to a fairy tale Premiership with a gutsy 12 point win over hot favourites Port Melbourne in the 1965 Grand Final. Vasil was rock solid in that victory, and his exploits that day made him one of the clubs’ favourite sons.

Varlamos continued to give the Panthers value throughout 1966, representing the VFA in the ANFC Carnival in Melbourne, and holding down the key defensive post right through to another Grand Final clash against Port Melbourne. This time however, the Borough would not be denied, and crushed Waverley by 43 points in gleeful revenge.

Varlamos retired after that second Grand Final appearance for the Panthers, and over succeeding years renewed his association with the Navy Blues. He derived much pleasure from watching the brilliant youngster who inherited his number 32 guernsey – Bryan Quirk – throughout his career, and as at 2012, is still seen regularly at club functions.

In 1962, Varlamos earned the career-long enmity of Essendon supporters when he ironed out the Bombers’ captain Jack Clarke during a late-season game. Seizing an opportunity, he ran straight through Clarke at a centre bounce, and knocked the Essendon skipper out cold. Pandemonium ensued, while trainers tried to bring Clarke around and Vasil’s team-mates were hard-pressed protecting him from a squadron of Bombers hell-bent on revenge. Clarke eventually got to his feet, but still groggy, he began raining blows on the nearest player – who just happened to be his team-mate, Graeme Johnstone!

In the 1970s and 80s, Vas' father owned a fish and chip shop in Hughesdale, where he proudly displayed images of his son. A typically proud Greek father, he was always up for a chat about the Blues, while frying up your potato cakes!

In 2004, amid a plethora of Teams of the Century and Best in 100 Years awards, Varlamos was one of four Blues honoured in the Greek Team of the Century. The others were Anthony Koutoufides, Ange Christou and Spiro Kourkoumelis. Alex Marcou and Chris Pavlou were also nominated, but missed out.