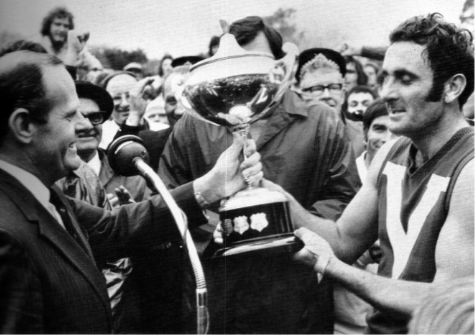 In what was a thrilling game of football and a triumph for the North Adelaide Football Club, the Roosters won the Championship of Australia by one point over the Blues.

Despite going into the final quarter with a five point lead and a strong wind at their back the Blues could not finish off the dogged Roosters. Carlton scored a goal in the first few minutes of the last quarter to take an 11 point lead but the Roosters hit back and goaled within a minute (Dennis Sachse). North goaled again in the 17th minute and kept Carlton scoreless for the final 12 minutes of the game to record a dramatic one point victory. Some of the best for North Adelaide on the day were Barry Robran, Garry Sporn, Adrian Rebbeck and Barry Stringer.

From a Carlton perspective some small solace could be gleaned from the fact that six of it's players from the 1972 Grand Final were missing from this game.

Interestingly this was the first time a major game of football had been played in South Australia on a Sunday.