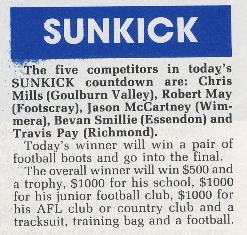 Bevan Smillie was recruited by Carlton after he had previously played with Essendon U/19's. Smillie was originally recruited from Eastern Suburban club North Ringwood and the Eastern Ranges U18s. In 1989, he represented Victoria at U/15's level. Carlton drafted Smillie at pick 79 in the 1991 National Draft, the club's 7th and final pick of that draft.

Smillie also competed in the Sunkick, see attachment to the right.