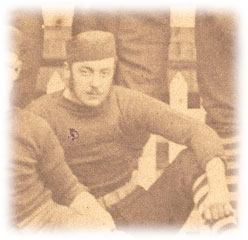 R. Crawford was in the first Carlton side to visit Adelaide.

R.Crawford was mentioned as giving great service in 1881.

Relation of H. F. Crawford or the same player?

The above photo is from Carlton's 1881 visit to Adelaide.
There is some confusion was to who this photo is of. The name on the photograph only says "Crawford."
Blueseum has two Crawfords playing in this era, a R. Crawford and a H. F. Crawford. One newspaper report says H. Crawford was in the touring party of 1881. Perhaps R. Crawford is misspelt and there in only one Crawford.

1884 June 4 Wednesday
Reported in the Sportsman that Crawford is leaving the Blues and heading for Adelaide on Friday 13.
"This is much to be regretted, as when in form he is one of the best back players in the colony, and withal a jolly good fellow, who will be much missed by his many associates."

Mark Pennings in his book "Origins of Australian Football" Vol2. lists both R. Crawford and H. Crawford both from Hawthorn in 1881.