On the day that Jack Hale began his illustrious career at Carlton, Geelong played excellent wet-weather football to thrash the Blues by six goals at Princes Park.

The home side was held scoreless in the first quarter, and the game was all but over by half time. Charlie Davey battled manfully in the ruck for his side, but Geelong’s key forwards Les Hardiman and George Moloney dominated the game and kicked 10 goals between them.

Carlton made four changes to the team. Downs was unavailable due to his broken wrist and Arthur, Gilby and Crowe were omitted. Recovered from injuries, Bullen, Little and Shea came into the line-up and youngster Jack Hale was included for his first game.

Play began in heavy rain and Carlton kicked to the Sydney Road end. Most players were wearing long sleeved jerseys. Davey was prominent early with his ruck play and marking. A long punt opened the scoring for Geelong with a behind. A free kick in the forward pocket provided their first goal. Vallence had two chances to score for Carlton but spilled both marks. Geelong swept forward and Gill repelled well. Geelong were playing a hard bumping game and kicking long, and weren’t afraid to kick off the ground where necessary. Carlton was playing wide and was lacking pace on the wet ground. Another Geelong shot was touched by Gill on the line with a high leap. The rain had abated and now a slight breeze blew across the ground. Kelly and Clarke brought the ball around the wings to Egan, but his set shot went out of bounds. Geelong were wasting chances, with 2 goals 8 behinds, but a snap after the ball spilled off the defenders’ hands gave them their third goal on the bell. Carlton had not scored and the Cats led by 26 points at the first change.

A new ball was used in the second quarter. Little, Crisp and Johnson featured in a quick forward thrust and Egan marked. His place kick provided Carlton’s first goal. Geelong answered with a long punt through the goals. Carlton supporters were not happy with the performance of umpire Blackburn and were letting him know at every occasion. The facts were that Carlton was slow to the ball and poor in disposal. They fumbled and overran the ball while Geelong were much more decisive and adaptable. Another Geelong goal, followed by a point and a victory was becoming unassailable for the Blues. Hale, Kelly and Vallence brought the ball the length of the ground to Egan, but this time his place kick was off line. Geelong’s sixth goal gave them a commanding grip on the game. Carlton’s second goal came from a nice snap from Green, scouting the pack well. Geelong’s seventh goal gave them a 39 point lead at the main break. For Carlton, Johnson had tried hard, Green and Shea were lively forwards and Park and Hale were providing stalwart resistance in the back half.

Little’s ankle trouble recurred and Cooper replaced him during the break. Rain was still falling on the resumption of play and Geelong soon had their eighth goal, courtesy of an intercepted hit out from Davey. Another Geelong goal followed, before Kelly scored a behind after good work from Cooper and Johnson. A free to Vallence close to goal gave the Blues their third goal. Carlton tried bringing vigour into the game and some fiery play, which threatened to get out of hand, resulted. A free late in the term to Bullen provided the fourth goal for Carlton to trail by 39 points.

Geelong opened the scoring in the last quarter after Gill and Bullen were beaten in a race for the ball near the goals. Play was happening in semi darkness. Two goals to Crisp gave Carlton some comfort, but the second was answered immediately by Geelong for their eleventh goal. Vallence kicked his second from a free, but again the Cats replied straight away. However, Carlton had not thrown in the towel and Shea, Johnson, Green and Egan were playing as if a grand final hung in the balance. Good work from Crisp enabled Vallence to kick the seventh goal, but Geelong kicked another right on the bell to give them a well-deserved 37 point victory.

At the end of this round Carlton were in 6th spot on the ladder with a percentage of 90.0. 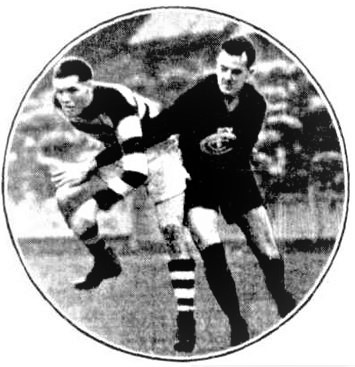