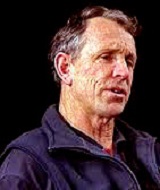 A former Essendon champion, Terry Daniher is the oldest of four brothers who all played League football. Captain of Essendon’s 1984 and ‘85 Premiership teams, and captain of the All Australian side in 1985, he was an assistant coach at Carlton in 2006 and 2007.

Daniher grew up on his family’s farm at Ungarie, in southern NSW, playing Australian football for his local team on Saturdays, and Rugby League in school carnivals. After winning a number of Best and Fairest awards, he switched clubs to nearby Ariah Park-Mirrool in 1975, and it was there that he was discovered by scouts from South Melbourne. A natural forward with excellent all-round skills, Terry made his senior debut for the Bloods in 1976, and by the end of his second season was showing plenty of promise.

Meanwhile, South Melbourne were intent on recruiting Essendon’s star centreman Neville Fields. The Bombers drove a hard bargain, but eventually a deal was reached that saw Terry and his brother Neale (whom the Bloods had signed, but never really looked at) traded to Windy Hill, while Fields packed his kit for the Lake Oval. In one of the most lopsided trades of the decade, South Melbourne got 60 serviceable games from Fields before he returned to Essendon, while the Daniher brothers’ careers stretched to a combined total of more than 350 games, and both captained the club.

Prior to leading Essendon to the 1984-85 flags, Terry was awarded Essendon’s Best and Fairest in 1982, and was All Australian in 1983, 1985 and 1988. He was twice the Bombers’ leading goal-kicker, and an automatic inclusion in their Team of the Century. After retiring from AFL football in 1992, he returned to the Riverina as captain-coach of the Wagga Tigers in the Riverina Football League, and led them to five Premierships out of six Grand Finals.

After finally retiring from the field, Daniher moved on to coaching and served as an assistant at Essendon, Collingwood and St Kilda before being recruited by Carlton in 2006. Unfortunately for all concerned, Terry’s two seasons at Princes Park under senior coach Denis Pagan were bleak at best. The Blues finished last in 2006, and second-last in 2007 after Pagan was replaced by Brett Ratten with six matches left in the season.

Daniher put an end to his coaching aspirations after that, leaving Princes Park to concentrate on his expanding cleaning and property maintenance business.