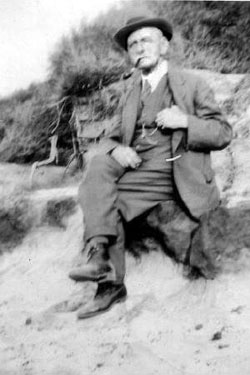 Challenge Cup Competition
DOB: 17 April 1850 London UK
DOD: 09 June 1941 Dromana Victoria
Career: 1866
William arrived in Victoria in October 1862 aged 11 on board the "Prince of Wales." After being in boarding school in England, he had travelled with the Skinner family whose daughter Hannah would marry William's brother Harrry, Carlton's first captain.
William John Chadwick was educated at Melbourne Grammar School where once again he was a boarder.
He played with Royal Park in 1865
At the age of 16 William in 1866 was the youngest Carlton player on the club's list.

Blueseum has recently (Feb 2013) been in touch with the descendants of the Chadwicks. We now have a photograph of William as an older man, he also played for the Blues in the very early days of the club. Unfortunately the family do not possess an image of his older brother and Carlton's first captain Harry, so the search continues.

1939 Friday April 14
"Mr W. J. Chadwick, of Dromana, who will 90 on Monday, is stated to be the oldest surviving employee of the Hobson's Bay Railway Co. and also the oldest former member of the Carlton Football Club, for which he played 74 years ago. From 1866 to 1870 he was a clerk in the railway service.The only intermediate station on the Port Melbourne line then was Raglan, now Northport."
(Herald p7)

"Mr. W. J. Chadwick, of Dromana who played for Carlton in 1866, will celebrate his 91st birthday to-day. He is a brother of Harry Chadwick a former captain, and is the oldest player and member of the club. Mr. Chadwick attended Melbourne Grammar School in 1862-63.
He was a booking clerk in the Hobson's Bay Railway at 19, and in 1870 joined the National Bank of Australasia. He remained in it's service for 47 years, and was manager of Taradale, Northcote, Scarsdale, Yarrawonga, Clifton Hill, Richmond, and Benalla."
(The Argus April 17 1941 p12)

William passed away at his residence "Clifton Villa" in Dromana aged 91, he was buried the next day, June 10 1941 at the Melbourne General Cemetery.

He was the brother of Carlton captain Harry Chadwick


Could this be William on the left?

From the 1882 photo taken outside the National Bank of Australasia in Bacchus Marsh.
See Harry Chadwick's page for further details 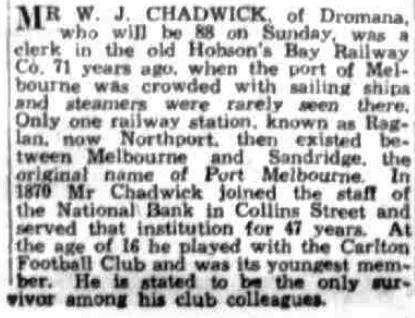