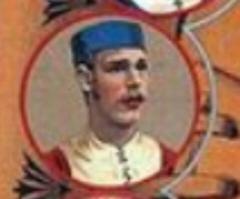 One of the new players for 1883, recruited from the Star of Carlton Football Club.

Also spelt as Sherwood in some editions.

Above, Shearwood (Fitzroy) is pictured on the montage of footballers surrounding the image of the late George Coulthard.

Mentioned as "Dutchy" Sherwood as among the nucleus of Carlton players to form the Fitzroy club. (Australasian July 29 1922, p24)

1883 Shearwood played in 17 games this year.
After the Maryborough incident on 18th. August, the Carlton Football Club suspended Whelan and Barrass for the remainer of the season.
Shearwood along with eight other players, in protest, resigned from the club.

1884 Crossed to the newly established Fitzroy Football Club along with Jack Elliott and James 'Ducky' Cameron.
These three played for Fitzroy in the match against Williamstown at Williamstown on May 3rd.
Shearwood played with the 'Roys 1884-88
Shearwood became Fitzroy's Vice Captain in 1885 and served many years on the Roy's committee.
The Albany Advertiser (W.A.) April 19 1934 reported that two of Fitzroy's original committeemen of 1884, Abe Shearwood and Jack Elliott are still going strong and attend all games.

Shearwood is pictured in the Fitzroy team of 1885. (Image: courtsey of Origins of Australian Football Vol. 2 p 186)

1934 April 07
It was reported in the Sporting Globe (p8) that Abe Shearwood is convalescing at the Caulfield Hospital after a motor accident.

"Death has busy in the last week or so with old Fitzroy footballers in the persons of Ben Nathan and Abe Shearwood. Both played in the first year of the club, and were fine club men. Nathan was a good follower, and Shearwood the first vice-captain of the club, a resolute and stalwart defender." (Australasian August 03 1935 p53)