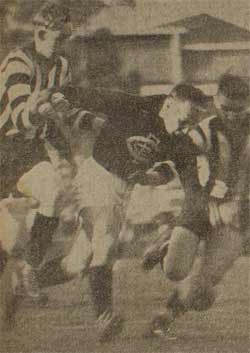 Remembered as Carlton’s back pocket in the infamous 1945 ‘Bloodbath’ Grand Final victory over South Melbourne, Arthur Sanger was a loyal Blue for ten seasons in the era encompassing World War II. Born in Daylesford and recruited from Castlemaine, he came to Carlton as an accomplished centreman, but struggled for a regular place in the senior side for a couple of years, until a permanent move to defence in 1941 restarted his career, and he went on to play more than 100 games.

It was Carlton’s chief recruiter; Newton Chandler, who spotted Sanger at Castlemaine in 1938. Chandler set to work with his renowned charm, and by July of that year, Arthur was at Princes Park, where he showed enough promise with Carlton Reserves to force his way into the senior side for the last home game of the season, against St Kilda. The Blues won by 16 points, with Sanger wearing guernsey number 16 for the first and only time. The following year, he switched to number 18, and carried it with distinction for another nine seasons.

After the Navy Blues defeated Collingwood in the 1938 Grand Final to claim the club’s sixth VFL flag, Sanger looked forward to more senior opportunities. But Carlton’s list was a formidable one, and he was selected only six times in 1939 - on five occasions as 19th man. Still, a real highlight came at the Western Oval in round 4, when the Blues decimated Footscray by 58 points, and Arthur came off the bench to kick what turned out to be his one and only career goal.

In 1940, with World War II beginning to ravage Europe, and thousands of young Australians flocking to recruitment centres, Sanger endured another frustrating year in which he played consistently well with the reserves, but couldn’t establish himself in the senior side. He made just one appearance at top level – as 19th man in Carlton’s win over Fitzroy in round 6 – on the way to a tie with Mick Price as Reserves Best and Fairest.

Happily for him, Sanger’s prospects improved markedly in 1941, under a new coach in Percy Bentley, and a new captain in Jim Francis. At last, Arthur was given the opportunity he had been craving when Bentley sent him to a half-back flank during the pre-season practice games, and challenged him to make the position his own. Sanger responded as Bentley believed he would, by settling into the role and playing a string of dashing matches that made him an automatic selection right through the home and away rounds. But on the eve of the finals – with his team sitting on top of the ladder – Sanger suffered a leg injury that ruled him out for a fortnight, and the Blues were sent tumbling out of flag contention by successive defeats at the hands of Melbourne and Essendon.

The next fork in the road in Sanger’s career arrived in round 15, 1942, when Carlton’s long-established back pocket Don McIntyre finished his fine career after the Blues’ spectacular win over Footscray at Fitzroy’s Brunswick St Oval. Sanger stood out as McIntyre’s logical successor, and that is precisely how the situation panned out. Although he was troubled by injury again in 1943, Sanger’s calmness under pressure and excellent foot skills came to the fore on the last line, and his value to the side was underlined when he was presented with the club’s Most Consistent Player Award in 1944 and 1945.

Like each and every one of his team-mates, Sanger’s career peaked at Princes Park on the Saturday afternoon of September 29, 1945, when Carlton defeated South Melbourne by 28 points in the most violent and controversial VFL Grand Final ever played. Promoted by the League as the “Victory” Grand Final - to celebrate the end of six horrific years of war - it has instead gone down in history as “The Bloodbath.”

Even so, what is often overlooked in relation to this match is that amid all the brawls and ugly scenes, there was some skilful football played in very difficult conditions – especially when the heavens opened up in the second half. One of those who kept his head throughout and was invaluable for his team was Arthur Sanger, whose tight hold on the Swans’ resting rovers blocked one of their main avenues to goal, and helped set up one of the Navy Blues’ most celebrated victories.

Sanger continued on at Carlton for two more seasons after that momentous occasion, and was still playing solid football when his career was prematurely ended by a badly-broken arm in a mid-season match against Collingwood at Victoria Park in June, 1947. (The photograph above of Arthur in action was taken in that game). He retired soon afterwards at the age of 29, but thankfully, wasn’t yet lost to the club.

In 1951, Sanger was appointed coach of the Blues’ Under 19 squad, and guided the youngsters to a Premiership in his first year. Among those who benefited from his influence during his two seasons in charge were Peter Webster, Graham Gilchrist, Brian Buckley and Richard Pratt.

In addition to his ability on the football field, Sanger was an outstanding all-round sportsman whose other feats of athleticism included taking a hat-trick of wickets as a bowler in District cricket, and scoring a hole in one on the golf course. Late in life he took up lawn bowls, and reached representative level.

One of a select group of less than thirty VFL or AFL players to have played over 100 games while scoring 1 goal or less, Arthur Sanger was also instrumental in the formation of the Carlton Past Players Association. He died on December 3, 1999, aged 80.