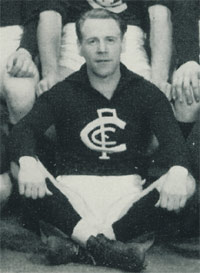 An accomplished rover and a dangerous forward pocket for the Blues in two famous Premiership teams, Albert Leslie ‘Mickey’ Price gave the Carlton Football Club loyal service for over thirty years. Born and bred in Carlton, he joined the club’s juniors while he was still at school, and climbed through the ranks to Premiership glory. On his way to those dizzy heights, Price won the Gardiner Medal for Best and Fairest in the Reserves competition in 1940, and later, coached Carlton Seconds to flags in 1951 and 1953.

Price wore guernsey number 33 when he made his senior debut as 19th man against North Melbourne at the Arden Street oval in June 1936. On a forgettable day for the Blues, the Shinboners took out the game by 19 points. Mick was dropped for the next two matches, then recalled to the bench when Carlton met South Melbourne in round 11 at the Lake Oval in mid-July. In a memorable game, ‘Soapy’ Vallence kicked eight goals at full-forward for Carlton – and we still lost by seven points!

Those were Prices’ only appearances in his debut year. In 1937 he switched to guernsey 30 and began to get more opportunities – although he faced strong competition from the likes of his captain; Ansell Clarke, Ron Cooper, and Jack Hale. However, it was the appointment of former South Melbourne Premiership ruckman Brighton Diggins as captain-coach of Carlton in 1938 that really launched Mick Price’s career.

A shrewd tactician and motivator, Diggins appreciated Price’s honesty of effort. Mick may have been just 170 centimetres tall and 70 kilograms, but he gave his all every time he pulled on the navy blue. Brave, and an often-deadly snapshot at goal, his emergence as a regular in the Carlton line-up was one of the factors in the Blues big improvement to finish on top of the ladder in ’38. In the second Semi Final against Geelong, Price shared the roving with Hale and kicked three opportunist goals in Carlton’s 32-point win. Two weeks later, he filled a very different role when Carlton faced Collingwood for the flag.

Although Collingwood had finished fourth on the ladder, the ease with which they disposed of Footscray, and then Geelong in the Preliminary Final, convinced many fans that the Magpies were entitled to start favourites against Carlton. On the other hand, Diggins knew that Collingwood’s rovers Des Fothergill and Alby Pannam held the keys to the Magpies’ game. On Grand Final day, he sent Jack Hale out to tag Fothergill, and Mick Price to shadow Pannam. The plan worked superbly, and Carlton won their sixth VFL flag by 15 points in front of a ten-record crowd of 96,834 at the MCG. Jack Hale was Best on Ground for the Blues, while Price curbed his attacking instincts to keep Pannam under a tight rein in a selfless and disciplined display.

Almost precisely a year later – in September 1939, Australia was drawn into a major war for the second time in 25 years when Great Britain declared war on Germany. Carlton missed the finals that year, before entering a dismal period as many of our club’s finest young men answered the call to arms. A form slump restricted Mick to only three senior games in 1940, and he spent most of the season in the seconds. There, his class shone through however, and he won the Gardiner Medal as Best and Fairest in the competition.

Price played only 25 senior games from 1940 to ’43 – the year he was presented with Carlton’s Best Team and Club Man award. Then, as the tide of war finally began to turn in favour of the Allied forces in 1944, he and Carlton returned to something like their best. Mick’s 18 matches saw him contribute 30 valuable goals as the Blues made a late run at the finals, only to fall short by 2 points. The following August, World War II ended at last when Japan was atom-bombed into submission. Carlton squeezed into the finals in fourth place on the ladder, and set the stage for the most controversial VFL final series ever held.

It all began tamely enough, with Carlton’s impressive win over North Melbourne in the 1945 first Semi Final. Mercurial forward Lance Collins was the star for the Blues with eight goals, with many of his opportunities provided by the impressive roving combination of Mick Price and Herb ‘Stumpy’ Turner. The game was open and skilful, although North was lamentable in their wayward kicking for goal.

Next up, Carlton’s opponent in the Preliminary Final was Collingwood – who made no secret of their intention to use physical intimidation as a weapon, and included a couple of ‘enforcers’ in their team. But, having been beaten by similar tactics before, Carlton vowed to fight fire with fire, and the match became a spiteful and vicious encounter. Collingwood actually led by 45 points early in the last quarter, before Carlton stormed back into the match and kicked seven goals in eighteen minutes to snatch a superb 10-point win. And while all this was going on, Carlton’s Grand Final opponent to-be; South Melbourne, was enjoying a week’s rest as they firmed into clear Premiership favouritism.

Originally promoted as the ‘Victory’ Grand Final, the 1945 Carlton-South Melbourne Premiership play-off was instead gone down in history the ‘Bloodbath.’ In front of an amazing crowd of almost 63,000 people packed into Princes Park, the game exploded into violence in the second quarter, and a continuous series of running brawls marred the match from then on.

Price shared the roving duties with Jim Mooring, and said later that he knew he was in for a good game when his first kick came off the boot sweetly, cleared a big pack in Carlton’s goal square, and bounced through for the Blues’ second goal. He finished the match with three goals, and Mooring added another two, as Carlton withstood everything the Southerners could throw at them to come out on top by 28 points. Led by their inspirational captain Bob Chitty, the Blueboys triumphed against the odds by sheer force of will. Even now, the 1945 Premiership stands among the most revered in our proud history.

After that extraordinary game, 'Mick' Price played just once more in navy blue, when he saddled up again for the traditional Grand Final rematch against South Melbourne at the Lake Oval in round one of 1946. Many of the combatants from the previous meeting were missing due to suspension, and remarkably, Carlton had given three stars; Vin Brown, Jim Clark and Jim Baird, permission to skip the Easter Monday clash to run in the finals of the Stawell Gift! Regardless, Carlton won the match (which was played in a very sporting manner) by eight points, thanks to the brilliance of Ken Baxter, who booted seven goals at full-forward.

By this stage, Price had become Carlton's leading goal kicker in guernsey 30, a record only surpassed some 70 years later when a young Jarrad Waite overtook him in Round 9, 2011.

Although his on-field contribution to the Carlton Football Club ended that afternoon, Mick Price continued to serve his beloved Blues for many years afterward. In 1951 he was appointed coach of Carlton’s Reserves team, and guided them to Premierships in 1951 and 1953 – defeating Essendon in the Grand Final both times, he coached the reserves up until 1956.

Mick’s other great sporting passion was cricket, and throughout his football career, he spent every summer as a pugnacious wicketkeeper-batsman for the Carlton Cricket Club. He captained the Blues’ First XI from 1939 to 1951, and parallelled his football exploits by winning successive VCA District championships in 1945-46 and 1947-48.

A life member of both the Carlton football and cricket clubs, and a man devoted to the Blues, Albert ‘Mickey’ Price passed away in November 1973, aged just 59.