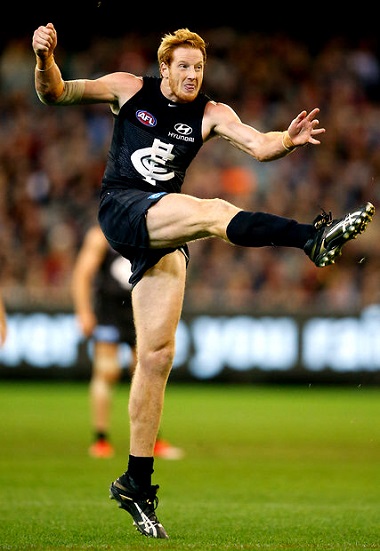 Tasmanian Andrew Phillips was one of four Greater Western Sydney players involved in a complex trade to Carlton in September, 2015. A 202 cm athletic ruckman who was a member of the inaugural Giants squad in 2012, he had been restricted to just 14 games over four seasons – at first by a persistent hamstring problem, and then by the dominant form of the Giants’ high-profile recruit Shane Mumford.

Phillips played his junior football with the Hobart-based Lauderdale Bombers, before graduating to the Tassie Mariners in the TAC Cup competition. In 2010 he was drafted by GWS at number 4 in the Rookie Draft, and two years later was elevated to the Giants’ senior list at number 97 in the 2012 National Draft.

Meanwhile, Andrew had started his senior career with an historic win over Gold Coast in round 7, 2012, before adding another eight matches to his resume in a promising debut year. Then in 2013, he badly strained a hamstring during pre-season training, and he couldn’t get back on the park before the season ended with the Giants ecstatic with their signing of Geelong’s emerging ruck star Shane Mumford.

Mumford’s presence immediately put Phillips into the shade, meaning that he was called up for only one game in 2014, and another four in 2015. Although he was still contracted for another two seasons, Andrew began to look for greener pastures, and may well have found them at Carlton. Years earlier, the Blues’ List Manager Stephen Silvagni had been instrumental in recruiting Phillips to GWS, but now he was at Carlton – with a shopping list of Giants he thought could boost the flagging Blues.

Carlton’s approach to GWS involved four players and a host of National Draft picks. The Blues offered Geelong’s 2016 first round selection (received from the Cats for Lachie Henderson) plus picks 28, 77 and 95 - in exchange for draft selection 8, and four targeted players – Phillips, Lachie Plowman, Jed Lamb and Liam Sumner. GWS agreed, and both clubs left the trade table happy.

Phillips settled into his new club during an intense pre-season preparation, and was rewarded by selection in Carlton’s team to meet Richmond in the opening round of 2016. On that balmy Easter Thursday night at the MCG, Andrew wore his newly-acquired number 34 guernsey out onto the field for the first time, accompanied by the roar from a crowd of 71,000. Although the Blues went down by 9 points, the team played refreshingly positive football. Phillips was handy with 21 effective hit-outs, and his first goal as a Bluebagger. Five more games in succession followed, then another hamstring strain cost Andrew a month on the sidelines. He came back to finish off the year strongly, averaging 16 hit-outs in 16 games, and contributing 6 goals.

Phillips would suffer from injury in 2018, restricting him to just the 5 games. A further 5 games in 2019, generally as back up for an injured Kreuzer, were played to make it 27 games in 4 years. Sensing more opportunity at the Bombers, Phillips sought a trade and moved on for season 2020.

Carlton has had two Andrew Phillips - this one will be known as Andrew D.